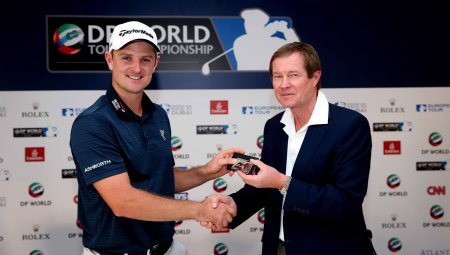 Justin Rose has been awarded Honorary Life Membership of The European Tour in recognition of his magnificent US Open Championship victory in June.

The Englishman, who held off Phil Mickelson and Jason Day to triumph at Merion Golf Club for his first Major title, was awarded the special accolade by European Tour Chief Executive George O’Grady at a press conference at the DP World Tour Championship, the final event of the 2013 Race to Dubai.

“This really is an incredible honour,” said Rose, who is currently second in The Race to Dubai and in contention to be crowned European Tour Number One for the second time in his career. For a kid who started his career with 21 missed cuts, I guess this means an awful lot really. And the whole journey could not have been done without all the hard work of The European Tour.

“It’s great to be back here and great to have a chance to be playing for The Race to Dubai. Like I said, this truly does mean a lot to me.

“It’s been a great journey. There are many, many fantastic players who have done so much for European golf who have received this honour, so it would be wonderful for me to be able to do the same.

O’Grady heaped praise on Rose, who has won six times on The European Tour since he burst onto the scene at The Open Championship in 1998, where he won the silver medal aged 18.

“When we have one of Europe’s own enjoying the season that Justin has had, and specifically winning the US Open Championship, we would be honoured if he would accept Honorary Membership of The European Tour and join a very illustrious band of Major Championship winners and others who have contributed hugely to the growth of The European Tour.”

Turning his attention to the impending US$8million tournament and his quest to overhaul Henrik Stenson at the top of The Race to Dubai, Rose added: “It’s a big motivation. I feel like this is the modern era, if you like, knowing it as The Race to Dubai. I won it as the Order of Merit, so I would love to do it.

“This year it’s shaping up for a really exciting finish, and after two really good weeks in Shanghai and Turkey, I’ve put myself in the position I need to be, where I can control my own fate by winning this tournament.

“When I won (the Order of Merit) in 2007 it was an amazing year. It came out of the blue – 2006 wasn’t great and 2008 wasn’t great, so it was a bit of an anomaly. This year will be built on a lot more solid foundation and therefore maybe mean s more.”