Pro of the Year Hails Contribution of GC2 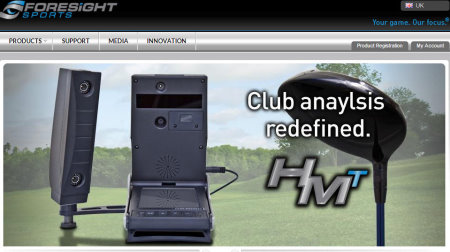 The Foremost golf professional of the year 2012, Dan Webster, gives a lot of the credit for his success to foresight – not just his, in seeing the way the industry was heading and changing his business accordingly, but also for purchasing a GC2 smart camera system from Foresight Sports.

Webster, who turns 40 next year, and is head professional at St Annes Old Links inLancashire, received the accolade, and the accompanying award, from BBC golf commentator Andrew Cotter at the recent Foremost Golf Industry Awards Dinner.

Webster has seen his turnover increase by more than 61 per cent in the last two years and while many factors have contributed, he is quick to admit it all changed when he purchased his GC2 launch monitor in November 2010.

He said: “The success has come over the last two years really. I’ve become more noticed from around two-and-a-half years ago, which coincides with when we converted the studio and put in the GC2 and started doing and talking about different things.

“I was told that I was, apparently, quite close to winning an award last year and it all ties in with the time I’ve been working with the Foresight Sports GC2.

“It’s been constant growth year on year for the last two years. I’ve actually done so many different things that you can’t pinpoint one particular catalyst – it could be that I brought my wife into the business, with her good PR and marketing background; Foremost and the Proshop Revolution have done wonders with the shop; and the GC2 has been awesome. It’s almost like the perfect storm really – lots of things have happened.

“I’m just the guy in the middle who’s pulled it all together. What happened first, though, was back in November 2010, when the GC2 was brought to me to see and, as soon as I saw it in action, my mind started whirring and kicked into gear. And since then lots of things have happened.

“I’m a big believer in the way things happen – there’s a route and path for why things happen the way they do. And if you just go back and join the dots you’ll see how it all correlates nicely with the arrival of the GC2.”

One of his highest-profile ‘things’ came in July, with the Open Championship taking place just down the road at Royal Lytham and St Annes. He hosted renowned golf coach Sean Foley and six Nike tour pros, who carried out a clinic on the range. Afterwards, several of them popped inside to the studio and Webster was delighted with their reaction.

“The pros loved it. Chris Wood and Gary Player, among others, came in and had a few shots on it while they were here and all were impressed with the GC2 and the studio set-up. There were lots of very positive comments.

Webster continues to go from strength to strength but he has no plans to rest on his laurels. He is already making plans for the coming years which might well see him up on stage again at future award ceremonies.

He admitted: “I can’t live without the GC2 now, it’s as simple as that. I’m investigating two or three other projects at the minute and each one of those would feature at least one GC2.

“I still get phone calls every day from other pros asking about what we’re doing – they may be getting fed up with hearing about what Dan Webster at St Annes Old Links is getting up to, but it all stems from the work I started off doing with the GC2 two years ago. Every day is exciting!”

When Foresight Sports introduced the GC2 launch monitor in the USA in 2010, it revolutionised ball-flight analysis and was quickly adopted by most of the world’s leading club manufacturers including Titleist, Cleveland/Srixon, Cobra/Puma, PING and TaylorMade.

And the launch of HMT (Head Measurement Technology) earlier this year, after two years in development and exhaustive testing with several of the major manufacturers, takes the overall package to an unprecedented level, by directly measuring critical club-head data including dynamic loft and lie, as well as ball-impact location, all to never before seen levels of accuracy.

The GC2 takes just seconds to set up; it’s self-calibrating and self-levelling, so you simply put it down, turn it on and you’re ready to go.