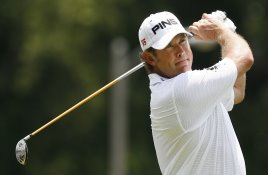 “This is a very rewarding achievement,” said Westwood. “All of us at this level strive to be number one. I’ve had to play the best golf of my career to get here and I look forward to elevating my game even more so to stay on top.”

Westwood carries his No. 1 ranking into this week’s HSBC Champions in China where he’ll battle world’s 2nd, 3rd and 4th-ranked players to maintain his position.

“Lee’s achievement is very gratifying for us,” said John Solheim, PING Chairman & CEO. “We couldn’t be happier for Lee. His play this year, especially at the major championships, has been remarkably consistent. It’s also a tremendous milestone for us as a company. Engineering the best equipment for the best players in the world is one of our goals. To have the PING name associated with the No. 1 golfer in the world completes our most successful Tour year in history.”

Westwood, who received his first set of PING clubs as a teenager, has 32 career wins and seven Ryder Cup appearances. All of his wins have come while a member of PING’s worldwide staff.

“I received my first set of PING clubs when I was 13,” added Westwood, 37. “It’s been a tremendous relationship with PING and the Solheim family. Their commitment to engineering equipment that helps me play my best golf is one of the reasons I’ve reached my goal of being number one.”