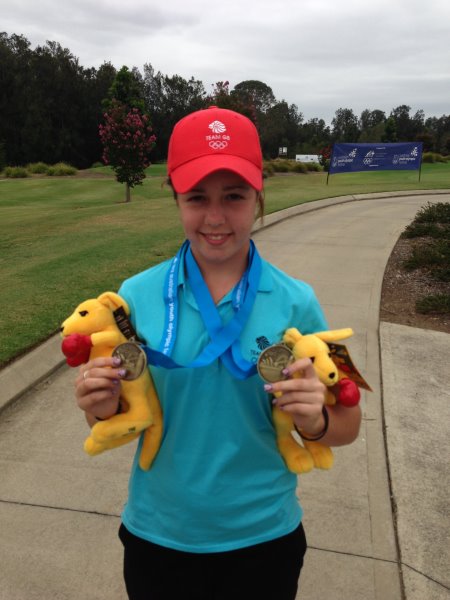 The Madrid-based coach paid tribute to the talented youngster from Remedy Oak Golf Club in Dorset following her individual and team success as part of Team GB at the Australian Youth Olympic Festival in Sydney.

Cummins’ joy at seeing his star pupil shine was matched by a number of other PGA pros involved in coaching the medal winning members of the Team GB.

These include Wrexham Golf Club’s pro Paul Williams whose daughter Chloe was part of the victorious team and also took bronze in the women’s competition.

Meanwhile the Scots pairing of Ewan Scott and Bradley Neil, also part of the gold medal winning team, were coached by Steve North and Kevin Hale, both from St Andrews Links Gol Academy.

Another coach seeing one of his charges do well was Kenwick Park’s Paul Spence who saw England boy international Ashton Turner take silver in the men’s individual event.

For Cummins, an Advanced PGA Professional, Hall’s achievement was even more satisfying given that he had first coached Hall as a seven-year-old at Canford Magna Golf Club.

“Georgia has done amazingly. She is just a machine, very focused, dedicated and always wants to improve, works hard and is just a dream pupil,” he said. “I first coached her at seven and then resumed coaching her four years ago in between me coaching full time on the European Tour for three years.

“I’m based in Madrid and we meet up regularly and she is just carrying on from last year when she climbed from 740th to fourth in the world rankings although that was a little bit of a false ranking because previously she hadn’t been able to play in enough events.”

Cummins describes Hall as easy to coach with a solution based approach to their coach/pupil relationship.

“I try to keep things as simple as possible and most of the stuff we work on is pretty straightforward,” he added. “Part of my role is to find solutions if there are any issues with her game. It is about keeping an open mind and thinking about the cause and effect and working backwards to identify problems.

“We use sports science while the technical side is relatively simple. With a player of her ability the secret is to keep her on the right path and motivated which is really easy with Georgia because she has such a great attitude.”

Cummins is based in Madrid and set to start a new project in March by opening an academy with tour ace Ignacio Garrido.

“It’s an exciting time with the academy and some great facilities which we hope will keep Georgia on the straight and narrow,” he says.

And Cummins has high hopes for Hall’s future and if attitude is anything to go by is predicting it will be a bright one.

“There have been many talented youngsters down the years that have been prospective superstars and not realised their potential but with her ability and attitude there is no reason why she can’t do whatever she wants in the game.”