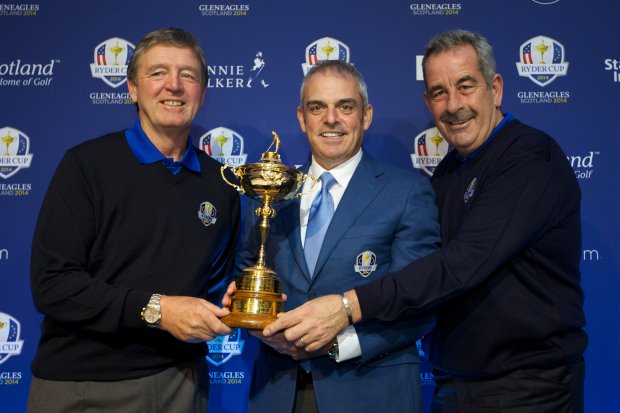 Paul McGinley, the European Captain for The 2014 Ryder Cup, has named Ireland’s Des Smyth and Sam Torrance of Scotland as his first two Vice Captains for the contest against the United States at Gleneagles this September.

The duo will bring vital Ryder Cup experience to the European team room; Torrance having played in eight consecutive matches from 1981 to 1995, memorably holing the winning putt at The Belfry in 1985, one of three winning teams he was a part of. It is a venue which continued to have particular resonance for the Scot when, 17 years later, he assumed the role of European Captain there and led his charges to an emotional 15 ½ – 12 ½ triumph.

As well as being confirmed as a Vice Captain for The 2014 Ryder Cup, Smyth was today also confirmed as the Vice Captain to Miguel Angel Jiménez for the upcoming inaugural staging of the EurAsia Cup between Europe and Asia, which will be played at the Glenmarie Golf and Country Club in Malaysia later this month.

The move continues the consistency of selection favoured by McGinley, begun when he named Torrance as one of the captains for last year’s Seve Trophy contest in France. It will also allow Smyth the opportunity of working once again with not only experienced Ryder Cup campaigners, but also the exciting young European talent at the disposal of Jiménez in Kuala Lumpur.

McGinley said: “I am delighted to officially unveil Des and Sam as two of my Vice Captains for The Ryder Cup. As well as being good friends, they are two guys that I greatly admire both personally and professionally and I know they will be vital assets to me in Scotland in September.

“They were the first two people I had in mind for this role when I was appointed captain and, since then, I have talked to a lot of the experienced European players about having them as part of the team and, to a man, they have been very supportive of the idea.

“Des took me under his wing when I was a young rookie on Tour and he gave me tremendous advice which was not only valuable then but has continued to ring true for me throughout my professional career. His views and ideas about The Ryder Cup particularly have consistently proved to be spot on and I really enjoyed working with him as a Vice Captain in 2006 when I was a player.

“Sam is a man who has probably had the most influence on me in terms of playing team golf in my career. Being my first captain in The Ryder Cup in 2002, I learned a huge amount from him and have continued to do so over the years. Since those early days, our relationship has grown to see us become firm friends and, living not far apart, we see a lot of each other socially as well.”

As a player, Torrance’s European Tour trophy haul stands at 21 in the 22 years between 1976 and 1998 and he still holds the record of the most appearances in history on The European Tour at 706.

He finished second in the Order of Merit on two occasions – behind Bernhard Langer in 1984 and Colin Montgomerie in 1995 – but put that statistic right when he joined the European Senior Tour, winning the John Jacobs Trophy for topping the Money List three times; 2005, 2006 and 2009, achievements helped by 11 Senior Tour victories.

Torrance said: “Everyone knows how much The Ryder Cup has meant to me over my career so I am absolutely delighted to be involved once again. Paul was a special part of my team at The Belfry in 2002 and he knows I will do everything possible to help him and the team at Gleneagles in September.”

Smyth captured eight titles on The European Tour including the 2001 Madeira Island Open which, at the time, made him the oldest winner in Tour history at the age of 48 years and 34 days, a record which stood for 11 years until it was eventually overtaken by Miguel Angel Jiménez’s victory in the 2012 Hong Kong Open.

The Irishman’s thirst for silverware continued in the ranks of the European Senior Tour where, to date, he has captured five titles, the last of these being at the 2012 Travis Perkins Senior Masters at Woburn, a venue where he also claimed the title in 2010.

Smyth said: “I was thrilled when Paul contacted me and asked me to be one of his Vice Captains at Gleneagles – there was no hesitation for me in saying ‘yes’. I relished the opportunity to be a Vice Captain at The K Club in 2006 and I look forward to playing a positive role once again in supporting Paul and the team.”

Both Ryder Cup teams now have two Vice Captains in place, United States captain Tom Watson having selected Ray Floyd last month in addition to Andy North who was named last year. However, Captain McGinley revealed that he will be making no further announcements in that respect until after Tuesday September 2 when the full European Team for The 2014 Ryder Cup is known.