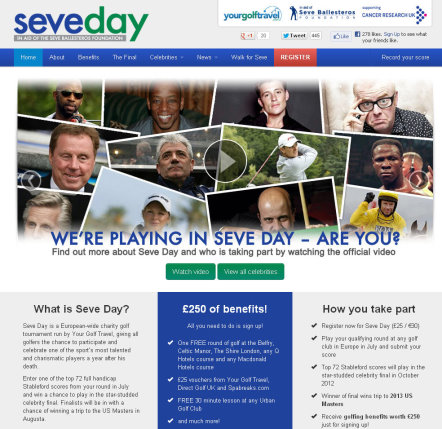 Ross Marshall’s tee-shot at Royal Lytham & St Annes signified the end of a 300-mile odyssey which has so far raised more than £20,000 for the Seve Ballesteros Foundation and Cancer Research UK.

Marshall, one of the founders of Your Golf Travel.com, was part of a the ‘Walk for Seve’ team that walked more than 40 miles per day for seven days in memory of the three-time Open champion – carrying golf bags full of clubs the entire time.

Starting from Cancer Research UK’s London headquarters on 10 July, the group paced all the way to Royal Lytham & St Annes – the scene for Ballesteros’ 1979 and 1988 Open victories – arriving through The Open Championship venue’s gates on Tuesday 17 July, having visited and teed-off at a host of prestigious golf courses en route.

Venues visited included Wentworth and The Belfry, where Ballesteros won the PGA Championship and Ryder Cup respectively, the latter of which included him amazing fans by becoming the first player to drive the green on the par-four 10th.

Marshall said:  “Arriving at Royal Lytham & St Annes for The Open after walking from London was an amazing feeling. The team has worked so hard through some very tough conditions – just the way Seve would have wanted it! I couldn’t think of a better way to commemorate such a legendary and cherished golfer than by finishing where he memorably twice won the Open Championship.

“I would like to express my thanks to all the venues and sponsors, for helping make this challenge possible as well as all the donations we have received so far. Together we can raise awareness about brain cancer and help further the vital research being done.”

As well as raising money for the Seve Ballesteros Foundation and Cancer Research UK, the impressive trek was also to increase awareness of Seve Day, a Europe-wide golf tournament set up by YourGolfTravel.com in conjunction with the charities.

The event is being backed by the likes of European Ryder Cup captain Jose Maria Olazabal, ‘The Voice of Golf’ Peter Alliss and top stars Justin Rose and Ian Poulter – allowing competitors to play a round of golf anywhere in Europe and register their scores on the www.seveday.com website.

A star studded grand final will then be held at The Belfry in October 2012, shortly after this year’s Ryder Cup in Medinah, where the top 72 stableford score entrants will play for big prizes and the Seve 2012 Trophy.

In return for a £25 / €30 entry fee, which goes directly to the Seve Ballesteros Foundation, participants also receive £250 worth of vouchers, golf lessons, free balls and complimentary rounds of golf, plus a chance to win an exclusive prize to The Masters 2013 if they win the Grand Final.

To make a donation towards the ‘Walk for Seve’ team’s fundraising efforts visit http://uk.virginmoneygiving.com/team/WalkForSeve

For more information on Seve Day or to take part go to www.seveday.com