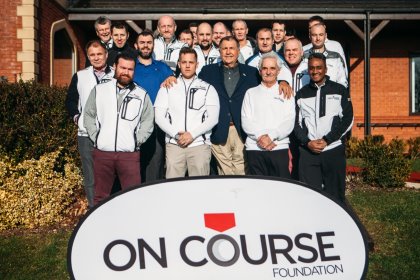 The On Course Foundation has launched an Ambassador Initiative to cater for growing interest in the charity’s work. The initiative was launched at an event held at the Welcombe Hotel & Golf Resort, Stratford Upon Avon this week.  As well as launching the scheme, the 2015 Ambassadors were announced.

The On Course Foundation launched in 2010 and has already helped hundreds of wounded, injured and sick Service Personnel and veterans across the country.  As interest in the charity grows, there are more demands to attend a variety of events, which has ultimately led to the creation of the Ambassador Programme.

Steve Holt, Managing Director of the On Course Foundation, explains, “Many of our members are already acting as Ambassadors and do a fantastic job representing us at a range of events.  The creation of this initiative is our way of formally acknowledging their efforts.”

There is a pool of Ambassadors in each region across the country who will formally represent the On Course Foundation at fundraising events and golf days.  They will also become spokespeople for the charity sharing their stories with the golf industry and widening awareness of how golf can help in the rehabilitation of Service Personnel.

“A round of golf with three other people who have been through similar experiences has proven to be better therapy than any counselling session.  The On Course Foundation has helped me become a better person on and off the course so I am very proud to represent them.”

The On Course Foundation www.oncoursefoundation.com

Twenty years after it launched the very first incarnation of the Pro V1, Titleist has unveiled the latest generation of the world’s best-selling golf ball.