Tim’s website includes “the Captain’s Blog”, a series of articles looking chiefly at the not-so-serious side of golf; equipment reviews; travel deals and offers; a feature on Celtic Manor’s 2010 course, where the Ryder Cup will be played in October; information about the European Seniors Tour; and an interview with golf course designer Jonathan Gaunt , and news and competitions from the English Golf Union.

There is also a series covering basic golf skills, with Stapleford Park’s golf pro Rich Alderson showing how to play the game with a good basic grip and swing. 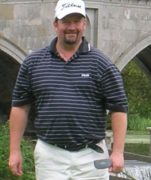 Tim, who has been a journalist since he left school at the age of 17, has been a keen golfer for more than 25 years, playing at and reporting on golf in various parts of the world. But why did he decide to design and build a website aimed at senior players?

“I turned 55 this year and many people started telling me I was on some sort of slippery slope to oblivion because that meant I had become a golfing senior,” says Tim, who is a member at both Stoke Rochford and Stapleford Park golf clubs.

“I found that instead of having fewer opportunities for golf, I had more. Being a freelance journalist, I could engineer my time to take part in some of the senior competitions, events and social games.”

“I then decided to look online and see what help and advice there was for older golfers, help for older people taking up the game for the first time and information on golf equipment which would specifically help older players.

“Information is out there but it’s spread around so many different websites that I thought it would be good to have a central site from where people could source more information and links which they might otherwise have to spend a lot of time looking for.”