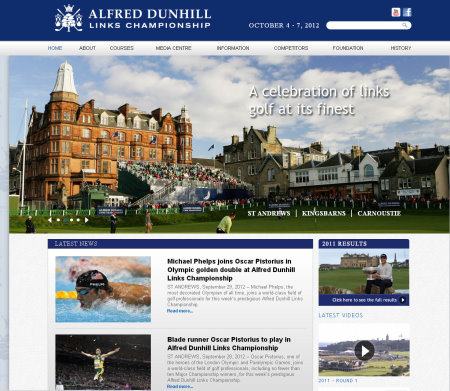 Michael Phelps, the most decorated Olympian of all time, joins a world-class field of golf professionals for this week’s Alfred Dunhill Links Championship.

American swimmer Phelps made history in the Olympic Aquatic Centre in London this summer when he won four gold and two silver medals to take his career total of medals won to 22, made up of 18 gold, two silver and two bronze.

In 2008 in Beijing, he famously won eight gold medals to beat the long-standing record of seven gold medals at one Olympiad held by Mark Spitz from Munich in 1972. Phelps took up golf after Beijing and is being taught to play by Tiger Woods’ old coach Hank Haney.

Phelps will join South African track star Oscar Pistorius, who runs on carbon fibre blades and this year became the first double amputee to compete in the Olympic Games. Pistorius also won two golds and a silver medal in the Paralympic Games.

Pistorius, who plays off 18 handicap, says: “It’s a real treat to play in the Alfred Dunhill Links Championship. I am a big golf fan and love the game. I have never played St Andrews, Carnoustie or Kingsbarns before, so playing them in a world-class event is a unique opportunity. There is so much history at St Andrews, every golfer longs to play there. As a South African it will be lots of fun to be playing in a tournament with other great names of the sport from my country in Ernie Els, Louis Oosthuizen and Charl Schwartzel. I can’t wait to get on the first tee. When the invitation came to play, not eve n a holiday was going to stop me.”

The Alfred Dunhill Links Championship, which celebrates links golf at its finest, is played over three of the world’s best known and respected links courses – the Old Course at St Andrews, the Championship Course at Carnoustie and the highly regarded Kingsbarns Golf Links.

With a prize fund of US$5 million, the championship incorporates two separate competitions – an individual professional tournament for the world’s leading golfers and a team event in which the professionals are paired with some of the most celebrated amateur golfers which creates a unique atmosphere.

Entrance to the Alfred Dunhill Links Championship will be FREE at all three courses on Thursday, Friday and Saturday. A ticket price of £15 (concessionary £10) will be charged for the final day’s play over the Old Course on Sunday, 2 October. Entry for under 16s and students is free. Tickets are available through the ticket hotline on 0844 581 4922 or at the entrance gates.