McIlroy is Race to Dubai European Tour Golfer of the Year 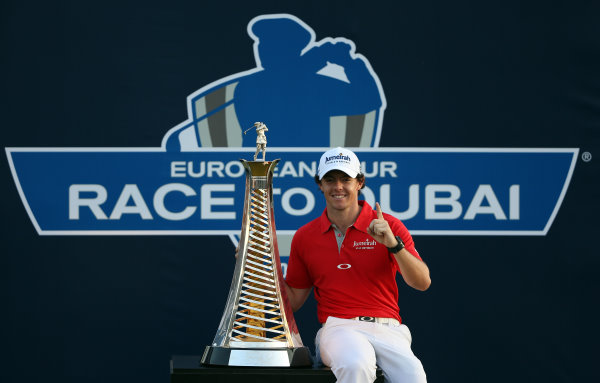 Rory McIlroy has been named The 2012 Race to Dubai European Tour Golfer of the Year, capping a sensational year for the World Number One.

The 23 year old Northern Irishman succeeds Luke Donald as winner of the coveted award, having also replicated the Englishman’s previously unprecedented achievement of winning both The Race to Dubai and the US PGA Tour Money List in the same season.

He also won three times on the US PGA Tour – in The Honda Classic, the Deutsche Bank Championship and the BMW Championship – and played a vital role in Europe’s victorious Ryder Cup winning team, before ending a magnificent personal year by winning The European Tour’s season finalé, The DP World Tour Championship, Dubai, in style, birdieing the final five holes on the Earth course to triumph by two strokes.

That fifth title worldwide in 2012 also meant McIlroy finished The European Tour season with record earnings of €5,519,118, beating the previous mark of €5,323,400 set by Donald last year, as he became the youngest player to win the Harry Vardon Trophy since Scotland’s Sandy Lyle in 1980 and the fourth youngest in total behind Seve Ballesteros, Dale Hayes and Lyle.

McIlroy can now add The Race to Dubai European Tour Golfer of the Year award to his list of accomplishments in 2012, which includes winning the Golf Writers’ Trophy on this side of the Atlantic as well as the PGA Tour Player of the Year honours in the United States.

The judging panel, which featured golf journalists from newspapers and magazines as well as commentators from radio and television, also reserved praise for several other worthy candidates, specifically Englishman Ian Poulter, who won four points out of four in Europe’s Ryder Cup victory as well as claiming his second World Golf Championship title in China in November, and South African Branden Grace, who won four times on The European Tour in 2012 after securing his card at Qualifying School the previous November.

But McIlroy, who was announced as the winner at the annual Golfer of the Year Luncheon at the Lancaster Hotel in London, received the unanimous vote from the panel to become only the second Northern Irishman, following his friend Graeme McDowell (who shared the award with Germany’s Martin Kaymer in 2010), to receive the accolade.

“Everyone who knows me knows how special the 2012 season was,” said McIlroy. “A couple of wins, including a Major, and consistent performances in big events all helped me win The Race to Dubai for the first time. To win that was a massive highlight of an amazing season, and I hope it will be the first of many. Now, to have been named as The European Tour Golfer of the Year puts the icing on the cake.

“It is a very special honour indeed and you only need to look down the list of players who have preceded me as the winner of this award to see precisely why – quite simply, it is a Who’s Who of golf and I’m delighted to now be a part of that in the history books.

“We play golf because we relish the opportunity to win Major Championships and world-class tournaments around the globe. But when we do that, to be recognised for these achievements is a great thrill and I thank all the members of the panel who voted for me.”

McIlroy is no stranger to the record books and this latest honour saw him add another to the annals as he became the youngest player to win Golfer of the Year since the award’s inauguration in 1985.

Bill Elliott, Golf Monthly contributor and Chairman of the Association of Golf Writers, said: “At times, selecting the winner of such a prestigious award such as this can be difficult, as was the case in 2010 when Graeme and Martin shared the accolade. But this year, our decision was straightforward.

“Rory’s performances on the golf course were spectacular but not only that, it was also the way he conducted himself on and off the golf course – with ourselves in the media and everyone else connected with this great old game – that made him a thoroughly deserved winner.”

Derek Lawrenson, Golf Correspondent of The Daily Mail, added: “The 2012 season was a remarkable one for European Tour golf with outstanding exploits from players such as Ian Poulter, who produced the greatest performance in the history of The Ryder Cup at Medinah, and Branden Grace who surpassed all expectations by winning four times the season after coming through the Qualifying School.

“Rory, however, capped all that by what he achieved across the year, but specifically atKiawahIslandand inDubai. Both were immense performances that took not only his game, but golf as a whole to a new level.”

Iain Carter, Golf Correspondent for BBC Radio Five Live, concluded: “Rory’s win in the US PGA Championship in August was stunning and had already ensured his place in golfing history, before his win inDubaisimply put an exclamation mark on a truly remarkable season. There is no question that he is the undisputed Golfer of the Year.”