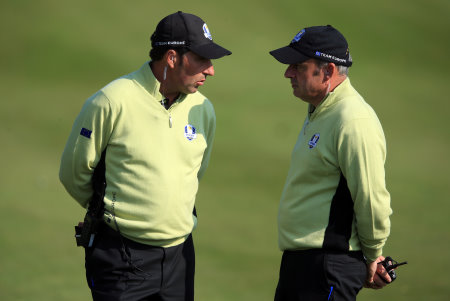 European Ryder Cup captains past and present will tee up in the Aberdeen Asset Management Scottish Open next month with José María Olazábal and Paul McGinley joining a world class field at Castle Stuart Golf Links.

Spaniard Olazábal guided Europe to a sensational 14½-13½ victory at Medinah Golf and Country Club last September, when his men staged an incredible comeback from 10-6 down heading into the final day’s singles matches to win by the narrowest of margins.

His successor McGinley is already plotting how to keep the Samuel Ryder trophy in European hands at the 2014 contest at Gleneagles, and at Castle Stuart will have the chance to run the rule over numerous contenders for his team before the qualification begins seven weeks later.

Both men have enjoyed illustrious careers on The European Tour and as Ryder Cup players, with Olazábal, winner of 30 professional titles worldwide including two Masters Tournament victories, forming half of The Ryder Cup’s most successful partnership as he and close friend Seve Ballesteros won 11, drew two and lost two of their matches together.

McGinley played in three Ryder Cups – all of which resulted in victory – and is best known for holing the winning putt at the Belfry in 2002.

However, neither player has been able to add his name to the star-studded list of former champions of the Aberdeen Asset Management Scottish Open, which includes Lee Westwood, Luke Donald, Ernie Els and two other previous European Ryder Cup captains in Colin Montgomerie, the victorious leader in 2010, and Ian Woosnam, who masterminded the 2006 triumph at the K Club.

McGinley said: “Castle Stuart is a venue which will always have happy memories for me because it was there, in 2011, that I made my 500th appearance on The European Tour. I remember shooting 66 in the last round that year to finish in the top 15, so I am hopeful I can recreate that form when we return there next month.”

Olazábal said: “It’s always such a pleasure to play links golf – especially in Scotland, the ‘Home of Golf’. I just love playing there, and the crowds are always great – hopefully the weather is just as good this year!”

A season ticket to see the McGinley and Olazábal, as well as world class players such as Phil Mickelson, Padraig Harrington, Paul Lawrie and Matteo Manassero at the Aberdeen Asset Management Scottish Open can be bought for £70 in advance of the tournament, a saving of £10 on admission at the gate. Adult day tickets are currently priced at £30, rising to £35 on the gate.

Concessions (60 and over) start at £50 for a season ticket and £20 for any one day tickets if purchased in advance. Under-16s accompanied by an adult are admitted free of charge and all car parking is also free.

Reserved grandstand seating can also be purchased immediately for the Saturday (£10) and the Sunday (£15) of the event. Hospitality packages are also available.