Matteo the Man: Manassero at 18 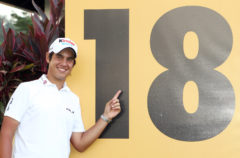 He has already achieved more than most golfers aspire to across their whole career but today, two days after winning his second European Tour title, Matteo Manassero celebrates becoming a man.

Manassero will toast his 18th birthday with his family and friends in Verona on Tuesday April 19 after giving himself the best possible present – victory in the Maybank Malaysian Open.

The Italian became the youngest champion in the history of The European Tour when he won the Castelló Masters Costa Azahar in October 2010 at the tender age of just 17 years and 188 days.

He went on to be named the 2010 Sir Henry Cotton Rookie of the Year after finishing 31st on The Race to Dubai, and then on Sunday, aged 17 years and 363 days, Manassero put the icing on the cake of a remarkable first 11 months as a professional by triumphing in Kuala Lumpur.

That victory, in just his 28th European Tour event, meant he is also second in the list of youngest European Tour winners but, more significantly, also moved him into the Top 50 on the Official World Golf Ranking for the first time, in 33rd position.

With that comes a place in the three remaining Major Championships, after just missing out on the Masters Tournament last month, but for the time being Manassero is simply concentrating on celebrating both his victory and his coming of age.

“It’s a big thing in anyone’s life turning 18,” he said. “You get your car, you get your bank account and everything else that comes with it. It will be a big difference for me travelling.

“It’s been difficult travelling and only being 17. You can be alone sometimes which isn’t easy but the actual travelling isn’t too difficult. My mum and dad sometimes travel with me – they like to see these places too – if not my physio comes once a month or my coach, Alberto Binaghi, so pretty much someone always comes with me. It’s nice to have someone to spend time with. I enjoy travelling. I like seeing new places.

“So it will be nice to turn 18 but I’m not making a big deal out of it. It’s just a birthday. My 18th is obviously a special one but I’m not one for partying. I’m going to spend it with my friends and family and have a nice dinner. That will be fun.

“I couldn’t imagine anything better – going back home to celebrate my 18th birthday and my second victory on The European Tour. It’s great to be able to celebrate both together. I don’t want to make too much fuss though. Something small.”

Such an unassuming and grounded nature has become the trademark of a teenager who has a maturity beyond his years and a youthful talent that is already drawing comparisons with his idol Seve Ballesteros, Rory McIlroy and Tiger Woods at a similar age.

Born on 19th April 1993 in Verona, Manassero first picked up a club at just three years old. Like early footage of 14 time Major Champion Woods, it was immediately clear that golf was in his blood and a rare talent was innate.

Manassero first nudged the attention of the wider golfing world when aged 16 years and 63 days he became the youngest winner of the Amateur Championship in 2009. That honour earned him a place in the Masters Tournament, where he became the youngest player to make the cut, and prior to that The Open Championship, where he played the first two rounds alongside Sergio Garcia and the legendary Tom Watson, who went on to lose to Stewart Cink in a play-off at Turnberry. Manassero, meanwhile, finished a remarkable tied 13th at just 16 years and 92 day, taking the Silver Medal as the lowest amateur.

“Winning the Amateur Championship was massive,” he recalled. “It changed everything. I got the chance to play in The Open and the Masters, two of the biggest tournaments, which really changed my life in terms of making it as a professional.

“The Open was a great experience. To play with Tom Watson and Sergio on the first two days was fantastic. It was probably my second professional tournament as an amateur so it was a big deal for me.

“Fortunately I had Alberto on the bag which kept me quiet. I just kept going and kept going and played well every day. Playing with Tom was really special. He has a great history in the game. You can learn so much from him. He spoke to me and made me feel good. He was very kind.  He’s been playing tournaments for more than 40 years and every time he is nice to everybody. That is something I learned from him.”

Manassero made his professional debut in May 2010 at the BMW Italian Open aged 17 years and 17 days and promptly became the youngest professional to make a European Tour cut, going on to finish 29th.

After playing in a handful of European Challenge Tour events, including finishing runner up in the Rolex Trophy, Manassero was third in the Omega European Masters in Switzerland before his making history in Spain when he broke Danny Lee’s record as youngest Tour winner by more than a year.

He also shaved a record held by his idol Ballesteros, as the youngest full European Tour Member by 12 days.

“Your first win is a great achievement and something you always remember,” he recalled. “You don’t really know when it is going to come so it is a tense moment. That helped me manage the pressure in Malaysia.

“I wasn’t as nervous on Sunday as I felt in Spain. Every single win helps you grow as a player. The first one helps you maybe more than the other ones. They were different victories. That first one was by four shots, my second was tight from the start to the finish but the feeling is the same because there is so much competition and many, many good players. So both had the same pleasure.”

With so much success and so many records already under his belt, the future would certainly seem bright for Manassero. Yet, typically, he is modest and understated in his assessment of the where his career will take him.

“To get in the top 50 in the world is a great achievement after just 11 months of professional golf,” he said. “It gets me into the Majors – I just missed Augusta but playing the other three will be fantastic. I’m really proud of that and the next target will be winning another tournament and keeping the momentum going. It’s going well and we’ll see what happens.”