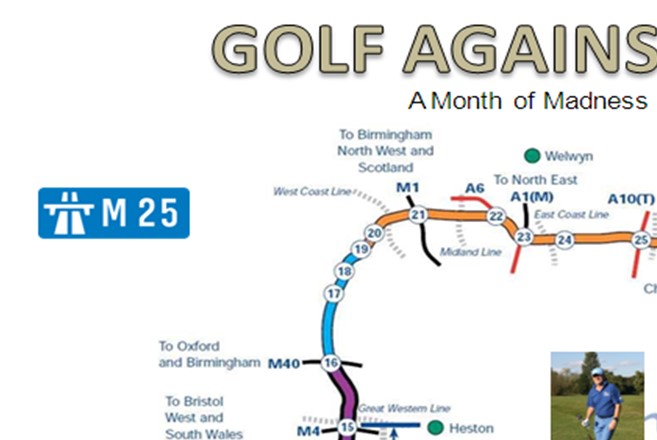 Trevor’s tour of the M25 began at Mid Kent Golf Club on 1st August and finished at Orsett Golf Club on 31st August, the clubs were fantastic in their support as were the national and local media in promoting the challenge.

How did it begin? There he was, stuck in a traffic jam onLondon’s M25 and his mind began to wander….how many junctions are there on the M25? How many golf courses would there be at each junction? Has anyone ever ‘golfed’ the M25?

He’s been interviewed live from the course by a BBC Radio in Kent and Essex, snapped by the National Press and he’s met Olympic medallist – Steve Blackley!

He’s played at Stoke Park in a Trilby, attended the X-Factor boot camp with Gary Barlow at The Grove AND Sir Nick Faldo has tweeted his odyssey!

Despite starting with a handicap of 12, its now 13 (!), Trevor is thrilled to finish, as is his wife, who has a list of jobs for him to now complete at home. Backed by the social networking site for golfers TheSocialGolfer.com (TSG) Trevor wrote a daily blog on the site, recording his scores, tracking his stats, counting the coffees, the blisters, the miles and the putts and to date it has received nearly 4,000 hits!!

Each course donated a tee time free of charge; the golfers joining him just paid the standard green fee; this and any additional donations went directly to Cancer ResearchUK. And now for the important bit, thanks to fellow TSGers and his friends he’s raised £8k!