Two-time Major winner Sandy Lyle is the 2019 recipient of the PGA Recognition Award for his outstanding contribution to golf. Shrewsbury-born Lyle picked up the accolade as guest of honour during the PGA’s recent annual fundraising lunch in Scotland. 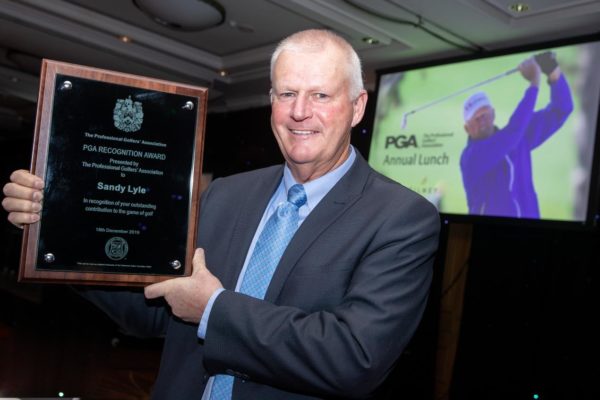 The 61-year-old follows in the footsteps of some of golf’s greatest names to have been recipients of the award including Seve Ballesteros, Sir Nick Faldo, Colin Montgomerie and current Ryder Cup captain Padraig Harrington.

Lyle turned professional in 1977 and was one of the key players responsible for the resurgence of European Golf in the 1980s. He went on to claim no fewer than 18 European Tour titles and won his first Major at the 1985 Open Championship at Royal St George’s Golf Club, becoming the first British player to lift the Claret Jug since Tony Jacklin in 1969. Three years later, Lyle put his name in the history books by becoming the first British player to win The Masters in 1988.

Lyle was instrumental in two European Ryder Cup victories, including Europe’s first win on American soil at Muirfield Village in 1987. In total, Lyle played in five Ryder Cups and was a vice-captain to Ian Woosnam when Europe recorded an emphatic victory over the United States at the K Club in 2006.

“This award is for my achievements over the years, and I’ll hopefully be ready to go for more awards in years to come,” said Lyle. “This is a nice one to start with and it is nice to be recognised when I am still around and kicking. I still have my dad’s old PGA badge that used to go on the front bumper of the car next to the AA badge. When my dad was a PGA man, that was the only thing that was around as the PGA Tour hadn’t started. Once you joined The PGA, you were in the syndicate of what was going on in golf.”

The PGA lunch is an important fundraiser for the PGA’s Benevolent Fund which helps members who have fallen on difficult and hard times.