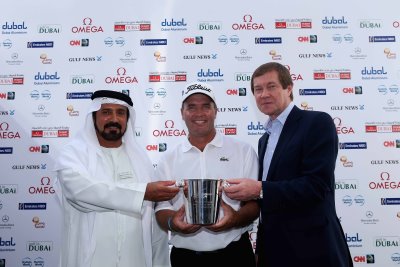 Thomas Levet joined the elite group of players to have notched 500 European Tour appearances when he began the Omega Dubai Desert Classic with a four under par 68.

The Frenchman became the 24th golfer to reach the milestone, a week after Spaniard Ignacio Garrido achieved the feat at the Commercial Bank Qatar Masters, and was presented with an engraved silver Thomas Lyte ice bucket by Mohamed Juma Buamaim, Vice Chairman and CEO of golf in DUBAi, and European Tour Chief Executive George O’Grady (pictured, courtesy of Getty Images).

Levet’s first event was the 1986 Peugeot Open de France, when he was still an amateur, and his first professional appearance was in the 1989 Open Renault de Baleares.

Since then the 44 year old has carved out a hugely successful career, winning six times on The European Tour – the most by a Frenchman – and helping Europe to a Ryder Cup glory at Oakland Hills in 2004. He came close to winning The 131st Open Championship at Muirfield in 2002 but lost out after a four-way play-off in which Ernie Els defeated Levet, Stuart Appleby and Steve Elkington.

Born into a sporting family – his father was a top-level hockey player, his mother played first division volleyball and his grandfather was a professional cyclist – Levet claimed his maiden title in the 1998 Cannes Open, then had to wait three years until the second – the British Masters, where he beat Mathias Grönberg in a play-off.

“It feels like I’m still in my first year on Tour. I have got a bit more experience now but it’s going so quickly. I remember playing here in Dubai when there was nothing at all. From the airport you could see the golf course, and now you have all these towers behind the range and there are towers from here to the airport which is about 25 kilometers.

“That’s something crazy. I’ve seen a lot of cities and countries and the growth of the game, as well, and it’s quite impressive in some parts.”

Recalling the last of his victory haul, at Le Golf National in Paris, Levet said: “It was one of the most pleasant wins I’ve had.

“If you play your best in every tournament, at the end of your career you have no regrets because you gave a hundred per cent.  And if you’re lucky to have a few wins, good for you.”

Levet, who has won €7,739,882 in European Tour prize money, has no plans to hang up the clubs just yet, and has every intention of closing in on some of the other members of the 500 club – although he has some way to go to catch Sam Torrance, who played 706 events, the most in the Tour’s history.

“Of course, as long as I’m healthy and I keep my card on Tour, I’ll be here trying to compete with the young guys,” he said. “Some of them have mothers younger than me, which is sometimes difficult.

“But as soon as I feel that I am not competing enough and I’m not making cuts and I see the game just going away from me, I’ll stop it. That’s it. But as long as I keep my card, as long as I’m competitive – I almost won last year in Scotland and in Australia – I’ll be there.”