Lee Westwood Helps Raise Over £228,600 For Help For Heroes 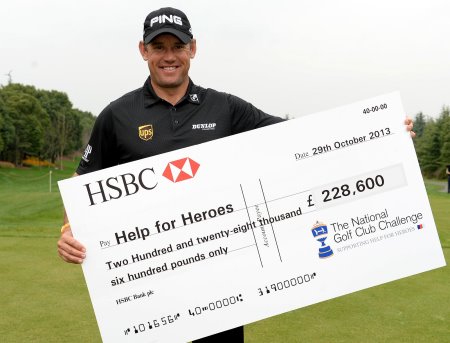 Lee Westwood OBE took time out of his busy schedule to be photographed at The WGC HSBC Champions Event in China holding a very big cheque for Help for Heroes for £228,600.

Lee has been a Patron to the National Golf Club Challenge, from its inception in 2010 – contributing his time and influence on a number of occasions to help raise the profile of the popular national charity golf competition. The impressive £228,600 donation from the 2013 National Golf Club Challenge event means around three quarters of a million pounds has been raised from the event in 4 years.

The photo opportunity was arranged by HSBC Bank who has kindly contributed to the 2013 fundraising initiative with several highly collectable auction items for NGCC’s online auction and provided banking services to the non-profit National Golf Club Challenge HSBC account.

“I’m proud to be Patron to the National Golf Club Challenge,” Lee commented, “It’s the best way I can think of to bring the Great British golfing community together to raise funds for such a worthy cause. Our troops do a great job and deserve our help and support. Congratulations to the Challenge team this year on such a successful fundraising achievement.”

Lee went on to say: “2014 will be a very important year, our soldiers withdraw from Afghanistan and as golfers can unite once more through The National Golf Club Challenge to help our brave injured service heroes whilst at the same time welcome home those who have given so much on our behalf over the last decade in Afghanistan. I would encourage every Golf Club in the United Kingdom to unite with us in 2014.”

The National Golf Club Challenge is a national inter-club competition which invites golf clubs throughout the UK to compete against each other, at the same time as collectively fundraising for Help for Heroes, supporting injured members of the British Armed Forces.

Lee’s involvement with the Challenge charity event continues to help “spread the word” with media interviews, as well as supporting the fundraising by donating some very collectable golfing memorabilia for the NGCC online auction.

“We’re indebted to Lee for his involvement as one of our high profile Patrons,” said Event Director, Stacey Jeffries, “Lee has been sensational from the moment I told him about the event back in 2010, he has always been dedicated to doing all he can to help and nothing is ever too much trouble for him. His ongoing support means so much to us and definitely makes a positive difference with our fundraising efforts. We look forward to another successful event in 2014 in what will be a very special year as we honour our Heroes.”

There is no registration fee for golf clubs to take part in the National Golf Club Challenge; the only requirement is to raise as much money as possible for Help for Heroes while running a qualifier event. Golfers from each event have the chance to progress to regional Semi Finals and a National Final at the fabulous Turnberry Resort sponsored by Your Golf Travel.com where some sensational prizes can be won.

Golf Clubs can register to take part in the 2014 National Golf Club Challenge at www.2014ngcc.com you can bid on the NGCC online auction supporting Help for Heroes at www.ngccauction.com from January 2014.

Additionally the NGCC team are running a very special golf day on 19th May 2014, where professional golfers join with the world of football to fundraise for our injured troops. Find out more at www.ngccgolfday.com