Kintore to the fore in ClubGolf Scottish Hydro Challenge Pro-Am 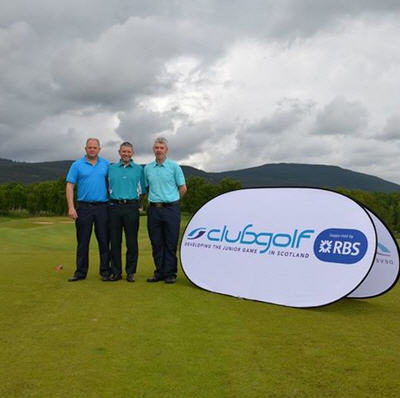 Sixty ClubGolf volunteers got the chance to experience being a tour professional for the day by taking part in the eighth annual ClubGolf Scottish Hydro Challenge Pro-Am at Macdonald Spey Valley Golf & Country Club.

Playing alongside an impressive field of distinguished European Challenge Tour players ahead of this week’s Scottish Hydro Challenge, 20 teams of three ClubGolf volunteers were welcomed to the Highland venue as a reward for their on-going commitment to Scotland’s junior golf programme.

That tally was just good enough to edge out Nairn Dunbar for the first prize of a week-long stay at the Macdonald La Ermita Holiday Resort on the Costa del Sol by a single shot.

The Highland trio were suitably consoled with the generous runner-up prize of an overnight, bed and breakfast stay with golf at Macdonald Spey Valley G&CC, also donated by Macdonald Hotels.

They were followed closely in third by Dufftown who oust both Stonehaven and Grange, finishing fourth and fifth respectively, owing to their stunning better inward half of 28.

Although they wrapped up the title in style with an 11-under-par total, things got off to a less than smooth start for the Kintore team, as they were left waiting on the first tee for their accompanying pro, who underestimated the travelling time from Edinburgh to Aviemore.

Arriving in just the nick of time, and after many of the other teams had already completed their first hole, Im stepped straight from car to tee and led his team to victory, challenging the notion that failing to prepare is preparing to fail.

“It was my first trip to Scotland and I had no idea how far Aviemore was from Edinburgh,” Im explained. “We left at 10am but there was a construction on the [Forth Road] Bridge and we were stopped for a while and there were a lot of other constructions, so it took a while.”

During their round, all volunteers were given the opportunity to discuss the benefits of ClubGolf with their professional, and Im was just as impressed with Scotland’s national junior programme as he was with the golf of his playing partners on the day.

He added: “I had a lot of fun today. My partners were nice enough to wait for me, so it’s good that it turned out that we won. They’re all good players – that’s why we won. I didn’t play well today, I was late and I was stiff but these guys played good.

“From what the guys told me, I think ClubGolf is great. It’s great that you have these coaches for the kids and it’s great that they start early because it also teaches discipline.

“I was brought up that way. I had a coach and learned a lot through him and I turned out to be ok. It’s good for the kids and good for the future. I think these guys do a great job.”

The Kintore volunteers were equally full of praise for the example set by Im on the course and were pleased to have the chance to watch a tour player apply his trade, as he prepared for one of the major events of the European Challenge Tour season, played over the same course from June 20.

Kintore ClubGolf coach Campbell said: “We had a great day, the sun was shining and we were well treated with a bacon roll and coffee on arrival. We had to wait on our pro but he was well worth waiting for because he played well and was great company. We had a really fantastic day.

“It’s nice to rub shoulders with the pros because we all want to play like them. We don’t but we like to try and that’s the thrill for us, playing with the guys that are the top players and stars of the future.

“We have a guy at Kintore, Gael Carlier, who does a lot for ClubGolf and Fiona McLaren, she does a power of work too. Gael is the reason that I am here today because he is the one who introduced me to ClubGolf, so a big thank you to them as well!”

ClubGolf is indebted to the time and effort given by its volunteer coaches and the ClubGolf Scottish Hydro Challenge Pro-Am serves as thanks from ClubGolf in return for all of their work.

As ClubGolf Manager Jackie Davidson explained, the programme would not be possible without the involvement from these generous individuals. She said: “Today was a great opportunity for ClubGolf to say a big thank you to all of our volunteer coaches, without whom junior golf in Scotland wouldn’t be the success that it is.

“It is fantastic that we are able to invite 60 of these very important individuals to play such a terrific golf course and I’m sure they all had a fantastic day.

“Thank you to EventScotland and the European Challenge Tour for their continued support in creating a fabulous day for our coaches during the busy tournament week of the Scottish Hydro Challenge.”