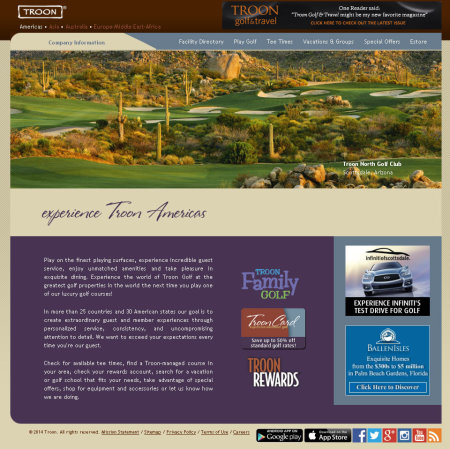 To say that Troon Golf management veteran Ken Kosak has been a world traveler would be bit of an understatement. In less than 14 years, Kosak’s career has spanned three continents, with stops along the way in Malaysia, United Arab Emirates, South Africa and Puerto Rico. Now, he returns to the United States as the new General Manager of The Clubs at St. James Plantation in North Carolina, winner of Troon Golf’s “Facility of the Year” in 2013.

Kosak, Troon Golf’s “General Manager of the Year” in 2010 will oversee four legendary golf courses in Southport: Members Club designed by Hale Irwin, Nicklaus Design Reserve Club, Founders Club created by P.B. Dye and the Players Club, designed by acclaimed local architect Tim Cate. 81 holes of magnificent golf in one of the country’s most awe-inspiring landscapes for the sport.

“St. James Plantation is a breathtaking community and offers members and their guests with an unsurpassed experience on the golf course and off,” said Kosak, who was also named Troon Golf’s “Ambassador of the Year” in 2007. “All of my years spent in the Middle East and beyond were magnificent and helped me immeasurably and to develop into the manager I am today.”

Prior to his appointment at St. James Plantation, Kosak was Group General Manager – Operations for The Els Club in Kuala Lumpur, Malaysia. Designed by four-time major championship winner Ernie Els, The Els Club consists of 63 holes and three high-end clubs spread over many miles. An 18-hole layout on the island of Langkawi is set in one of the oldest tropical rainforests in the world while a nine-hole design is adjacent to the South China Sea.

A three-year stint as Group General Manager – Operations in the United Arab Emirates from 2009-2012 enabled Kosak to oversee two of the area’s most prestigious golf clubs: Saadiyat Golf Club and Abu Dhabi Golf Club, home of the HSBC ABU Dhabi Golf Championship. Total rounds of play for both courses exceeded 120,000 a year.

“Every country I have worked in has had cultural diversity along with their own laws and customs which certainly makes working and doing business in certain places interesting to say the least,” said Kosak. He was also General Manager of The Montgomerie in Dubai, UAE from 2004 – 2007 where his Club earned the prestigious “Facility of the Year” award as Troon Golf’s top performer in 2006.

Kosak also ventured to South Africa for a brief one-year stay as General Manager – Operations for the Pearl Valley Golf Estates in Cape Winelands, a Jack Nicklaus-designed layout that has been consistently ranked in the Top 5 golf courses in the country by Golf Digest and was Director of Club Operations from 2001-2004 for El Conquistador Resort in Las Croabas, Puerto Rico.

“I remember being a young assistant professional in Pinehurst and seeing an article in Golf Digest about Troon North opening and the things that made the club unique. This was certainly very appealing and something that I wanted to experience for myself. Who would have thought at the time that I would travel the world for the company and be a part of some of the best clubs in the world? This really was made possible by the opportunities of working for Troon,” added Kosak.

St. James Plantation is the number #1 selling community in the Coastal Carolinas, and with the Clubs, an ocean-front beach Club, and a full service marina it offers its residents lifestyle opportunities that are unmatched for coastal living. For real estate inquiries and club information, please visit the website at www.stjamesplantation.com