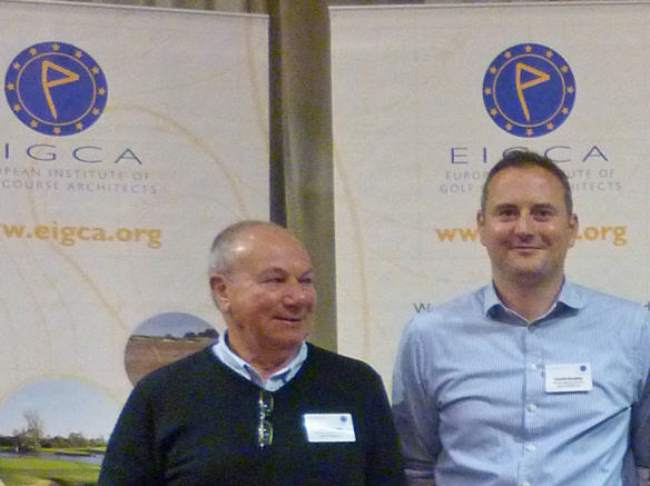 The funeral of John Greasley will take place on Wednesday 12th December with the ceremony at 11.30am at the Stafford Crematorium, Tixall Road, ST18 0XZ. This will be followed by a wake at The Tavern, College Road, Denstone, Uttoxeter, ST14 5HR.

Charlie Greasley has said that all are welcome to attend both the ceremony and the wake.

A statement from the European Institute of Golf Course Architects says, “We are very saddened to have to inform you that John Greasley passed away last week after a battle with cancer.

“As most of you know, Greasleys were one of the first Partners of EIGCA and were recognised for 15 years of support at our annual meeting in Belfast in 2016. Our photo shows John, next to his son Charlie, accepting the award.

“John was a very quiet and polite man, a true gentleman who was very well respected by everyone in the industry, and this was one of the few times that he was in the limelight, and even then he had to be persuaded to get up on stage. He will be greatly missed and our thoughts and prayers are with his family at this very sad time.”

EIGCA Past President Tom MacKenzie added, “When John Greasley’s son, Charlie called to tell me that John had died, I realised what a loss that was to the golf design and construction business. I first worked with John in the mid-1990s and we worked together on projects from the mountains of Scotland to Denmark and Cyprus. All of them were done with John’s trademark efficiency and fairness.
“I enjoyed dealing with John because he was so well organised and he did what he said. He expected the same from me too and I learnt a lot from him as a result.

“During our visits away, we spent a lot of time together and, on a personal level, I liked him more and more. He was a private man but excellent company nevertheless.

“Another sign of a good man running a good company is that the turnover of staff was tiny. Even those who leave often come back. Knowing many of his employees, he was firm but fair with them and they respected that. They know where they stood.

“Finally, I am really pleased that his son Charlie joined the company and that they worked together for so many years. There will be a smooth transition upholding John’s guiding principles. I wish Charlie and all of the team well for the future.

“I do not know the rest of the family but, if my sense of loss is anything to go by, then he will be missed hugely by those close to him. We have lost a Gentle Man.”