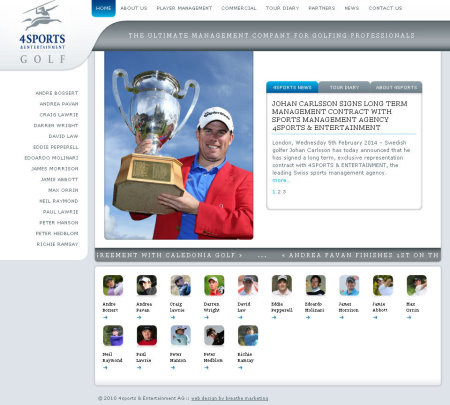 Carlsson, from Gothenburg, Sweden, studied at San Diego State University before turning professional in 2011 at the age of 24. Following a successful amateur career, where he reached 13th in the World Amateur Golf Rankings, Carlsson spent his first full year as a professional competing on the Nordea Tour & Nordic Golf League. Alongside five top 5 and four top 10 finishes, he took home the trophy at the Nordea Tour Championships which resulted in him ending the year in second place on the satellite Tour’s Order of Merit, thereby securing himself a card for the 2013 Challenge Tour and graduating to Europe’s second tier golf circuit.

In his rookie year on the Challenge Tour, Carlsson’s most notable performance came at the Kazakhstan Open where he stormed the leaderboard, winning the tournament by 7 shots, the biggest margin recorded in the tournament’s history. He accumulated six additional top ten results during the season, including a 4th place finish at the Norwegian Challenge, 6th at the inaugural Oman Classic and 9th at the Dubai Festival City Grand Final. As a result of this, Carlsson finished the year in 5th place on the Order of Merit which granted him instantaneous elevation to the European Tour for the following year.

His maiden campaign on the European Tour got off to a fantastic start when he finished 7th in his first event at the South African Open followed by another top ten finish at the reputable Abu Dhabi Championships.

On signing with 4sports, Johan said: ‘Since turning professional things have moved very quickly for me and so I am really grateful to now have 4sports working with me so I can focus on my game.’

Marcus Day, manager of the Golf Division, further commented: ‘Johan’s promising future in golf is evidenced by the incredible string of consistent results he has accumulated during his professional career so far. We are all looking forward to working with him as he sets out to achieve his goals.’