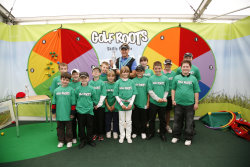 The players may still be in rehearsal for the 150th Open Championship but on Monday afternoon Ian Poulter starred centre stage at St Andrews when he received a prestigious Golf Foundation award on 12th July.

The sport’s leading charity the Golf Foundation’s ‘Spirit of Golf’ Award has been presented to Gary Player, Tony Jacklin and Lee Westwood in previous years and for 2010, Ryder Cup hero Ian Poulter joins the impressive cast.

The award is presented to an individual who has made an outstanding contribution to golf and has inspired youngsters to take up the game.

Ian was invited to join the Golf Foundation team and a party of children from Powfoot Golf Club, Dumfries & Galloway, at The R&A Swingzone in the tented village at St Andrews. After taking part in a high-energy Tri-Golf challenge with the youngsters he was presented with the finely crafted Spirit of Golf trophy by Foundation Chairman Charles Harrison, in front of a large audience.

Charles Harrison said: “As you may know, the Golf Foundation is all about making the game more accessible to young people and our target is to reach one million children per year through our Golf Roots programmes by 2013. In order to do this we need role models who excite and inspire young people. Ian – you do a tremendous amount for children and young people both inside and outside golf so it gives me great pleasure to present you with the Golf Foundation’s Spirit of Golf Award.”

Ian Poulter said: “This is a great honour. I love this game and as a youngster I worked hard at it and had the pleasure of watching the great players and they inspired me. For the youngsters now, I’d say follow your dreams, follow your passion and get excited about golf because it really is the best game in the world.”

In addition to his successes as a player, Ian has helped the Golf Foundation through his attendance at the Spoony Classic, which raises funds for Golf Roots. He presents the Ian Poulter Invitational at Woburn for promising youngsters and away from golf he supports the Dreamflight charity, which takes disabled and seriously ill children on their ‘holiday of a lifetime’, and the Willow Foundation, which aims to give young adults with life-threatening conditions a chance to escape the pressures of their daily routine.

Ian Poulter clearly enjoyed his Tri-Golf and then happily answered a number of questions from the other VIPs on the day – the boys and girls from Powfoot GC. Asked whether he thought he could win The Open, Ian replied with a definite “yes!”. He recalled his greatest ‘Open shot’ was his 15-foot birdie putt in the closing stretch of the 2008 Open at Royal Birkdale. He revealed he was lucky that Tottenham Hotspur had rejected him as a youngster and that a Sunday Roast was a favourite on every return to England!

Mike Round, Chief Executive of the Golf Foundation, said: “Ian Poulter plays his golf with intensity but with a sense of fun, sportsmanship and camaraderie with his fellow players, and we think this has been an excellent example to set youngsters who can all learn important ‘Skills for Life’ through their golf. With great role models like Ian, the Golf Foundation will be able to open up golf to many more youngsters in support of the national partnerships of England, Scotland and Wales.”

* Derek Burridge supplied the specially created silver and glass trophy for the occasion.