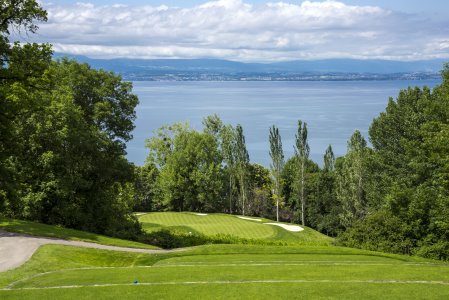 Following an international golf career, Helen Alfredsson becomes ambassador of the Evian Resort and its famous and recently renovated golf course. Three-times champion at the Evian Masters (1994 – 1998 – 2008) on this very course, she enjoys a high profile all over the world.

The Swedish golfer began her career in 1989 and took part in the Evian Masters 14 times. It was in September 2013, after The Evian Championship, which took place on the course at the Evian Resort Golf Club, that Helen Alfredsson decided to retire from the professional tour following an international golf career. She is considered one of the leading ambassadors of women’s golf and honours the Evian Resort by becoming theirs.

She recalls her first time at the Evian Resort in 1994 during the 1st Evian Masters, “a magical place with unique views of the lake and welcoming people I have become more attached to each year”.  She has travelled the world over and stayed at the most prestigious hotels, yet in her view, the Evian Resort remains an exceptional place. A place where you can be active and take part in an endless choice of sports activities, quench your passion for golf on one of the most technically challenging championship courses and take it easy at the hotel’s various spas.

When asked about this new partnership with the Resort, she replies: “This is the tournament that has meant the most to me, and last year, after The Evian Championship, I felt really sad when I thought that maybe I wouldn’t come here anymore. When the Evian Resort asked me to be its ambassador, to promote this wonderful place around the world, I was absolutely thrilled and flattered to know that I was going to be part of introducing people to one of the places that has had so much meaning in my life. ”

As for Yannick Le Hec, Managing Director of the Evian Resort, he is delighted with this partnership with one of the golf’s leading ladies. A way of furthering his ambition of making the destination a “Golf Resort”.