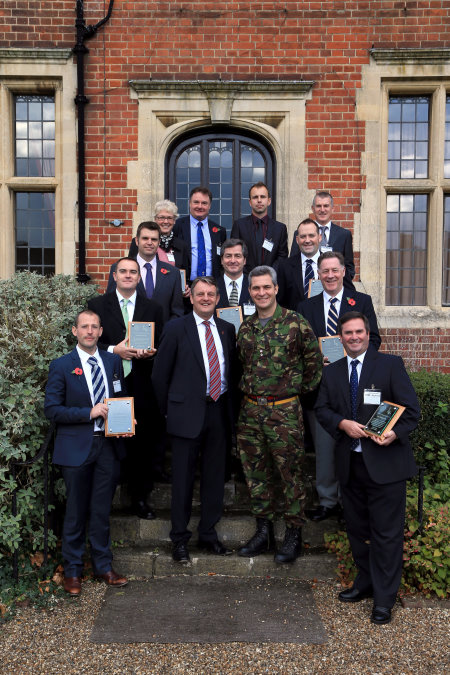 A group of unsung PGA professionals who have been coaching injured soldiers have received special recognition at Headley Court.

The 11 have been volunteering their time as part of a PGA Golf Buddy programme which pairs up pros with soldiers many of whom have suffered life-changing and serious injuries including loss of limbs in Afghanistan and Iraq.

The Golf Buddy initiative has placed around 20 soldiers with PGA pros across the country with the aim of introducing them to golf as part of their rehabilitation.

And it was in recognition of their contribution that the pros were invited to attend the Surrey base where they were given a tour of the defence medical rehabilitation centre and were also presented with plaques by Lt Col Tristan Crew, who is clinical development officer for the base.

“What the PGA pros are doing in the Golf Buddy programme is very special, it makes a massive difference to these soldiers,” he said. “Sport is ideal for our guys, many of them who have been used to competing on the rugby and football field and the unique handicapping system of golf enables them to compete against their peers.

“More importantly they get a lot of self-esteem and confidence from playing golf. The support of the golf community has been vast with 230 golf clubs giving us free green fees while PING and Callaway have generously supported us with equipment.”

The PGA pros utilize their coaching skills to help soldiers overcome a range of physical disabilities with a new target for many of them of qualifying for the Captain Pietsch Trophy which sees injured British war veterans take on their American counterparts in what Lt Col Crew described as ‘their Ryder Cup’.

PGA captain Eddie Bullock who attended the presentation paid tribute to both the soldiers and work of the PGA members. He added: “It has been very humbling to listen to some of the experiences of the soldiers at Headley Court. I was fortunate to represent the PGA during a trip to Afghanistan last year and the one thing I remember is being able to put a smile on faces because of the game of golf.

“I would like to thank all the PGA members involved in this programme. They have all done it quietly without any fuss and I’m sure their efforts are appreciated.”