Guan the Master as Chinese Junior Golf Hits Another Milestone 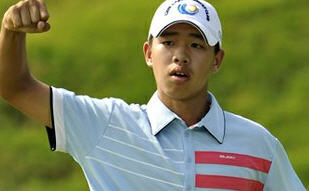 A momentous year for the development of golf in China reached a new high point on Sunday when 14-year-old Guan Tian Lang won the 2012 Asia-Pacific Amateur Golf Championship in  Thailand and qualified for the Masters next year.

The Chinese prodigy won the prestigious tournament at Amata Springs after he shot a final-round 71 for a 15-under-par total of 273 and, as the event is backed by the Augusta National Golf Club, the teenager from Guangzhou will now line up against the greats of the game in the Spring.

Back in April, Guan, a member of the HSBC sponsored China Junior Golf team, qualified as the youngest ever player to play in a European Tour Event – the 2012 Volvo China Open.

His latest achievement is yet another example of how Chinese golf is making its mark on the world game – in the summer 14-year-old Andy Zhang became the youngest player ever to qualify for a major when he took part in the US Open and in September 16-year-old amateur Jing Yan became the youngest Chinese female golfer to ever play in a major tournament when she appeared at the Ricoh Women’s British Open at Royal Liverpool.

All three players are graduates of the HSBC China Junior Golf Program, a sustainable long-term structure and framework to develop the future of Chinese golf.

He has already represented China at junior level and was also part of the China team which recently recorded a landmark victory when they beat the USA in their own backyard at the USA-China Youth Golf match at the Corde Valle Golf Resort in San Martin,     California.

Two other players from the victorious China team that day, Jin Cheng and Dou Zecheng, also competed at the Asia Pacific Amateur Golf Championships over the weekend. As well as the Augusta National Golf Club, the event is also supported by the R&A.

HSBC Global Head of Sponsorship and Events Giles Morgan said: “This is yet another milestone for golf in China and for HSBC’s China Junior Golf Progamme. I would like to congratulate Guan Tian Lang on his success and it really is fantastic to witness the development of talented young Chinese golfers.

“We have just renewed our sponsorship of the WGC-HSBC Champions for another three years but we are just as proud of the fact that we have spent almost ten years sponsoring youth development and grassroots programmes across Asia as we seek to develop the champions of the future.