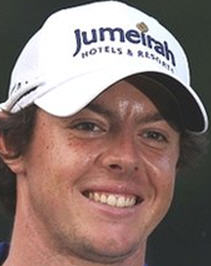 The sky might be the limit for new US Open champion Rory McIlroy but there is no danger of the 22-year-old taking his eye off the ball says his long-time coach Michael Bannon.

Bangor PGA professional Bannon, who has coached McIlroy since he was eight, was among the millions of golf fans glued to their screens as he clinched a stunning eight shot victory at the Congressional Country Club near Washington DC.

McIlroy’s wire-to-wire triumph made him the youngest winner of the event since the great Bobby Jones in 1923 while his rounds of 65, 66, 68 and 69 saw a host of records tumble.

It has also prompted speculation about just what feats might lie in store for the talented Northern Irish player with many including Padraig Harrington already identifying him as the man to challenge Jack Nicklaus’s record haul of 18 major titles.

“Rory is very grounded, and won’t let any of the speculation or attention go to his head,” said Bannon. “He’s been used to it anyway as he’s handled it all his life and just takes it in his stride.

“Rory will continue to take it one tournament at a time. You can’t say definitively that someone is going to win 10, 14, or 18 majors, all you can say is he’s got the potential and Rory proved that with his performance in the US Open.”

The manner of McIlroy’s emphatic march to victory also erased memories of his back nine collapse at the Masters in April but Bannon insisted that was never a problem for the player.

“He moved on very quickly from what happened at the Masters. He has got good people around him like Stuart Cage and Andrew Chandler and when something goes wrong, he says; right, how do I change this, and we just take the positives out of it and put together some strategies for next time.”

Bannon was impressed by the confident tone McIlroy struck when talking to him throughout the tournament but had been buoyed by seeing him in practice before he even arrived at the US Open.

“He was just flushing it, it was like get your house on him winning,” added Bannon. “When he starts doing that, coupled with putting improvements he is unstoppable. And my thoughts from talking to him during the tournament were that he was going to win, especially before the last round, it was in his mind and he said I’m going to do this.

“When he plays to his best it’s like he’s playing a different course. It’s like that with all the top players, they make the game look easy and it was like that with Rory except no-one else was doing what he was doing!”

Among the things that impressed Bannon were McIlroy’s putting and his ability to shape the ball.

“The course suited his game, it required a high carrying ball flight with a lot of right to left which is his strength. But we’ve also been working on making his swing more neutral, people say his stock shot is a right to left draw, which it is, but he can hit any shot he wants and he hit quite a few fades into pins and was able to move the ball around at Congressional.

“The other thing was his putting. You’ve got to hole putts and the big thing for me was that he looked like he was going to hole putts.”

In a bid to encourage more golfers to take lessons from PGA professionals, the PGA has launched a TV advertising campaign with Ryder Cup winning captain Colin Montgomerie.

The advert, screened for the first time during on Sky Sports’ US Open coverage, highlights the role played by PGA professionals in the careers of the players involved in Europe’s stunning success at the Celtic Manor Resort.

Golfers see Montgomerie describing the importance of the team ethic in Europe’s victory over the United States before telling viewers to develop their own winning games by receiving coaching from a PGA professional.

“Every player on the European team has been coached and mentored by a PGA member throughout their golfing career,” Montgomerie says in the advert, adding, “If you want a winning game then see a PGA professional.”