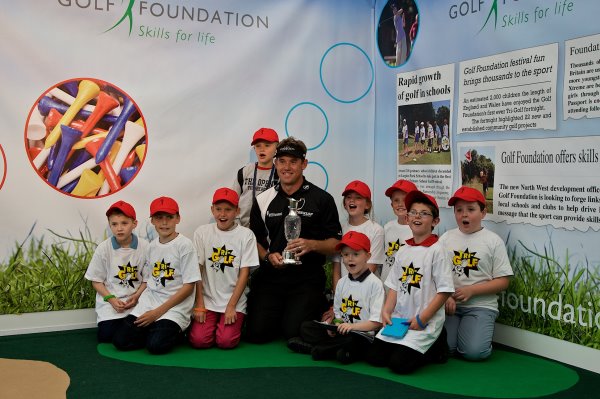 The Golf Foundation team has a special reason for celebrating the success of the European Team at the Ryder Cup. More than half the side that won the match so brilliantly in Medinah on Sunday has supported the Golf Foundation in recent years, and a number have played key roles in the charity’s development.

Paul Lawrie is a Vice President of the charity that seeks to make golf more accessible to children from different backgrounds and circumstances.

Lee Westwood is an Ambassador for ‘HSBC Golf Roots’, the widely supported Golf Foundation strategy that aims to introduce golf to one million boys and girls in 2013, through schools, communities and golf clubs.

Ian Poulter and Lee Westwood have both been recipients of the Foundation’s prestigious ‘Spirit of Golf’ Award, among other recipients Gary Player, Tony Jacklin, Ernie Els and Peter Alliss. The award is for inspiring youngsters to enjoy golf.

Justin Rose and Lee Westwood were both winners of the Golf Foundation Age Group Championship as young teenagers. Westwood was also supported in his early coaching by the Foundation.

Martin Kaymer, Rory McIlroy and Sergio Garcia have all supported the Golf Foundation in raising its profile in the past, by playing ‘Tri-Golf’ at leading public golf events (as have Westwood, Lawrie, Poulter and Rose). They have helped to highlight how Tri-Golf, a colourful, fun and inclusive entry game, has served to transform completely how schools, teachers, parents and children view golf as a sport.

One of the great figures in recent Ryder Cup history, Colin Montgomerie, is the current President of the Golf Foundation, and a strong supporter of the charity’s work. Bernard Gallacher is a former President.

Mike Round, Chief Executive of the Golf Foundation, said: “It is wonderful that many of our leading golfers are prepared to support the next generation of young golfers. They do so in various ways: for example, the Foundation offered support to Lee Westwood as a youngster and he has repaid this brilliantly by backing our efforts to reach new young players. Other players, including Zach Johnson and Webb Simpson from the American team, have given their time to take on the youngsters at Tri-Golf at events such as The Open Championship, and really helped us to raise our profile.

“Interestingly, all the players mentioned above showed great warmth and generosity in their support at these events, attributes which we term ‘skills for life’ in our programmes. The level of sportsmanship on show at Medinah, where some generous ‘gimmes’ were given in the highly tense closing stages, demonstrates just how crucial this side of the game remains. The Ryder Cup shows how genuine this ‘skills for life’ message is, and all the Ryder Cup players set a great example to our young golfers.”

Youngsters are now set to enjoy some Ryder Cup-style competition of their own. The Golf Foundation’s new ‘Super Sixes’ competition has been developed to offer school pupils a competition format based on the team play and excitement of the Ryder Cup. It will be delivered in 50% of School Games events during the 2012/13 academic year.