Golf legend Gary Player — one of five men to win the career grand slam and namesake of The Player Foundation that has raised millions globally for underprivileged children and education — is the recipient of the 2020 Old Tom Morris Award from the Golf Course Superintendents Association of America (GCSAA).

Player, 84, is among an elite group of golfers who have won all four majors. The others are Gene Sarazen, Ben Hogan, Jack Nicklaus and Tiger Woods. The winner of nine major championships, Player’s road to the career grand slam started when he won The Open Championship in 1959. He went on to win the Masters in 1961 and the PGA Championship in 1962, and he completed the grand slam in 1965 at Bellerive Country Club in St. Louis at age 29.

The OTM Award has been presented annually since 1983 to an individual who, through a lifetime commitment to the game of golf, has helped to mould the welfare of the game in the manner and style exemplified by Old Tom Morris. Morris, a four-time Open champion, was the long-time superintendent at St Andrews in Scotland until his death in 1908. The OTM Award will be presented Jan. 29 during the Opening Session of the Golf Industry Show in Orlando.

“I have tremendous respect for all the fellas and ladies and all the staff that get up early in the morning and prepare a golf course for members. They do an incredible job,” Player said.

“So does Player — in many ways,” said GCSAA President Rafael Barajas, CGCS. 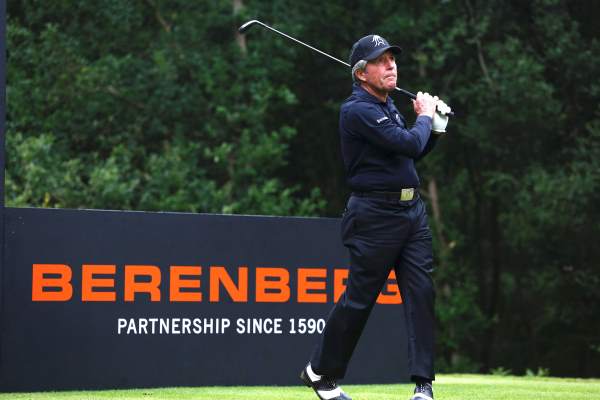 “Gary Player’s legacy in golf is known worldwide, but he should be equally recognized for his philanthropic endeavours through The Player Foundation,” Barajas said. “We are truly honoured to bestow the Old Tom Morris Award upon a consummate gentleman who has worked tirelessly for underprivileged children and impoverished communities around the globe. Gary Player embodies not only the best of golf, but the best of humanity.”

The Player Foundation surfaced many years ago, long before Player was winning golf titles.

“I said ‘When I’m a champion one day, I’m going to help people that are struggling.’ And we’ve helped tens of thousands of people all around the world with difficulties and improved their lives,” Player said.

His efforts include assisting in the prevention of AIDS, aiding special-needs children, and the development of children’s shelters. In 1983, he bought the Blair Atholl estate in South Africa and transformed it from a small farm school to a facility that has served hundreds of youths in a format that fosters their talents in academics as well as in activities such as drama, agriculture and sports.

Player made headlines on the sports pages. In his career, he has recorded 165 victories worldwide (including 24 PGA Tour wins, nine majors and nine PGA Tour Champions majors) spanning seven decades. In 1978, at age 42, Player rallied from seven shots behind through 54 holes and fired a final-round 8-under-par 64 to win the Masters. He had already made history with the Masters: When he won his first of three green jackets 58 years ago (he also won in 1974), Player became the first international player to win at Augusta National Golf Club.

“Gary didn’t have the power of somebody like Jack (Nicklaus), but Gary maxed out his mental and physical capabilities,” said professional golfer Jim Colbert, who played against Player and became good friends with him.

Player was inducted into the World Golf Hall of Fame in 1974. Before that, he received the USGA Bob Jones Award in 1966. In 2006, he received the Payne Stewart Award. Seven years ago, he received the PGA Tour’s Lifetime Achievement Award. Dubbed “The Black Knight” for his penchant for wearing all black on the course, Player was also well known for his vigorous fitness routine. He and his wife, Vivienne, have six children, 22 grandchildren, one great -grandchild and another on the way in March.

A list of past Old Tom Morris Award winners is available at https://www.gcsaa.org/about-gcsaa/awards/old-tom-morris-award