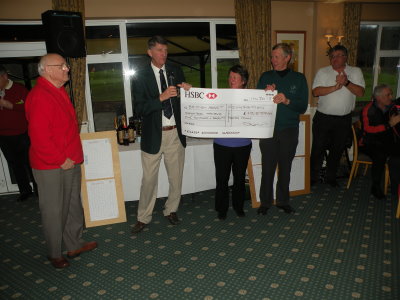 There was much celebration at The Drift Golf Club at the 2015 Captain’s Drive-In as the retiring 2014 Club Captain, Nigel Baxter presented a cheque for £17,577 to Ian Hansford, Treasurer of the North Surrey branch of the British Heart Foundation.

Both Jan Steward, Ladies Captain (2014) and Jim Ford, Seniors Captain (2014) were delighted their sections with the Men’s section were able to raise this record sum, while an emotional Ian Hansford thanked the Drift Club members for their immense efforts. Along with the £4,000 raised on the Club Captain’s Day in July for the Royal Air Force Benevolent Fund the Club has donated over £21,000 in 2014 to charities.

The Drift Golf Club is located in East Horsley, Surrey and throughout 2015 is celebrating its 40th Anniversary with a number of commemorative events.