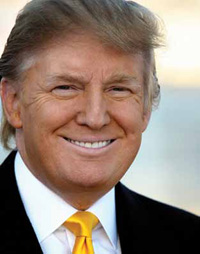 Donald J. Trump, Chairman and President of The Trump Organization, will be presented with the honorary award of Doctor of Business Administration (Hon DBA) at Robert Gordon University, Aberdeen on Friday 8 October.

Chancellor of Robert Gordon University, Sir Ian Wood CBE, will confer the award at the ceremony. Following receipt of his award Mr. Trump will deliver an acceptance address in front of an audience of invited guests and students.

The 64-year-old, thrice-wed tycoon,  sometimes known simply as “The Donald”, is reportedly thinking of campaigning to be the Republican candidate in the 2012 US Presidential Elections.

The University has chosen to confer this degree on Mr. Trump in recognition of his business acumen, entrepreneurial vision and the long-term future his company is planning in the North-east of Scotland, where the championship golf course is scheduled for completion in 2012

Fashion Designs students at Robert Gordon University’s Gray’s School of Art are already involved in designing a corporate tartan for Trump International – Scotland. Having been invited to come up with some initial designs, the students have been dealt the task of weaving together the Trump brand and ancestry.

The University also has a thriving Masters of Business Administration (MBA) course and has developed a specialist Oil and Gas MBA. At the last Research Assessment Exercise in 2008, the University was cited as having world-class research in both Leadership and Entrepreneurship.

Professor John Harper, Acting Principal and Vice-Chancellor of Robert Gordon University, said, “Given that business and entrepreneurship lie at the heart of much of the University’s academic offering, it is only fitting to award Mr Trump with an honorary degree. He is recognised as one of the world’s top businessmen, and our students, the entrepreneurs of tomorrow, can learn much from his business acumen, drive and focus.”