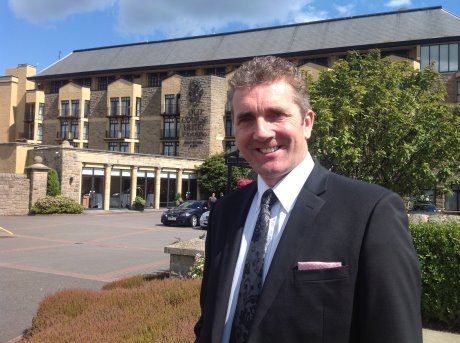 The five red star Old Course Hotel, Golf Resort & Spa in St Andrews has confirmed the appointment of David Scott as its Director of Operations.

St Andrews born, David has worked for the resort since 2008 and is “thrilled and honoured” to take on the role. David says: “I grew up on Hope Street – just a nine iron from the Old Course’s 1st tee – and am very proud to be able to take on such a great role at this iconic and world-leading hotel resort.”

David studied at Madras College and worked in the school holidays in the Tom Morris Golf Shop and the Pancake Place in South Street. “I left school to train as a quantity surveyor, but golf was obviously in my blood and I passed on the surveying to take the role as head assistant professional at Blairgowrie Golf Club in Perhshire.”

In 1987, David was appointed Head Professional at Letham Grange in Arbroath – just at the time that his playing career took off. David explains: “As the club’s pro, I was managing the membership, retail and coaching elements – at the same time as playing on the Tartan Tour.” In 1990, David represented Great Britain and Europe in the biennial PGA Cup Match and over the next few years saw his game develop – qualifying for two Scottish Opens and the PGA Championship at Wentworth. He won the Granite City Championship, five Midland Alliance Golf Championships as well as the Valderrama International Pro-Am. He was also runner-up in the Scottish Professional Matchplay Championship

David says: “I really enjoyed competing – and a real highlight was being runner-up to Brian Barnes in the British Club Professional’s Championship in 1989.

In 1996, David’s next move took him to Balbirnie Park Golf Club in Fife as head professional. Three years later he was offered the chance to head up the new team as Director of Golf at Kingsbarns Golf Links. David says: “It was a fantastic opportunity – building a highly motivated and professional team and assisting with the marketing of a brand new course.” Kingsbarns opened in 2000.

In 2008, with the Old Course Hotel, Golf Resort & Spa under the new ownership of Kohler Co., David made his next career move. David says: “Kohler Co had bought the hotel including the Duke’s Golf Club and committed to a significant programme of investment. I joined The Duke’s as manager in 2008 – overseeing the running of the club facilities, membership and course’s maintenance.” David’s unrelenting ethos to deliver a quality experience for both members and visitors rubbed off on the Duke’s team. David explains: “I have been very fortunate to work with some fantastic people – and the Duke’s was no exception. Golf Professionals, club and green keeping staff whose hard work greatly helped the Duke’s climb numerous golf course rankings and win the Golfers Choice, Best Club in the UK in 2010 and 2013.

David is an advanced Fellow Member of the PGA. He is married to Yvonne. They have two children – Jenna and David – and live in St Andrews. Last year, David was appointed interim Director of Operations for the entire resort, a position that has now been made official. David concludes: “I have been extremely lucky in my career. For anyone with a love of golf, there is nowhere better to be than St Andrews. And for anyone with a love of hospitality, there is no better place than the Old Course Hotel, Golf Resort & Spa.”