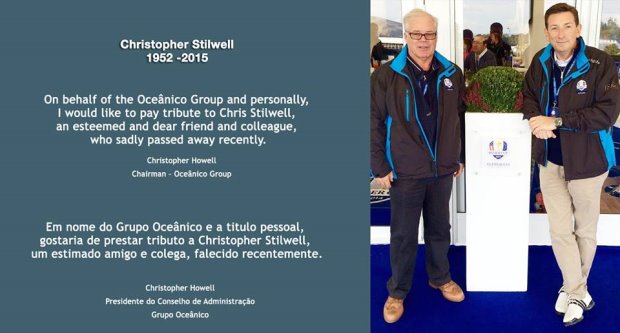 Christopher Howell, Chairman at Oceanico, says, ”As recently as four weeks ago Chris was in Tenerife for IAGTO’s IGTM, representing our business and then a week later, many of you would have seen him in “action” during the Portugal Masters at our Oceânico Victoria golf course, welcoming everyone. Anyone privileged to have dealt with Chris at every level, would quickly gather his passion, professionalism and enthusiasm for the Golf Tourism industry and the game itself.

“Chris was a great ambassador for Portugal’s Golf Industry, a lovely man and a worldwide respected figure, certainly an inspiration for those who worked with him through the years.

Chris was more than just a colleague, he was also my friend and will be sadly missed.”

Peter Walton, Chief Executive of IAGTO, the global golf tourism organisation, said: “We were all devastated to hear the sad news that Chris had passed away. Only a few weeks ago he was busy meeting IAGTO members, myself and colleagues at the International Golf Travel Market in Tenerife.

“Chris was already a giant of Portugal’s golf tourism industry when I was cutting my teeth in golf travel some 20 years ago, and throughout these past two decades he remained a popular, influential and trusted figure within our industry, greatly respected by all.

“With a pioneering family history entrenched in golf, Chris had enormous passion and knowledge of the business of golf, and the Algarve in particular, bringing the highest level of professionalism to golf travel, playing a central role in the Algarve’s remarkable success as a premier golf destination, first managing golf clubs and latterly as President of Algarve Golf and CEO of Oceanico Golf.

“He was a tremendously affable guy who will be sorely missed throughout the European golf tourism industry and further afield. On behalf of the golf tourism industry, we would like to convey our deepest sympathy to his wife, Ana Luisa, family and colleagues at this time.”