In 1953 a fresh-faced, 22-year old Peter Alliss made his Ryder Cup debut at Wentworth. This week, almost exactly 60 years to the day, he returned to the Club alongside fellow Ryder Cup stars Tony Jacklin and Bernard Gallacher, as one of the guests of honour at a glittering gala dinner to celebrate the diamond anniversary of this historic event.

This sumptuous dinner was the finale of a great day of Ryder Cup themed golf for 84 members out on the iconic West Course, where the US team, once again, proved victorious! 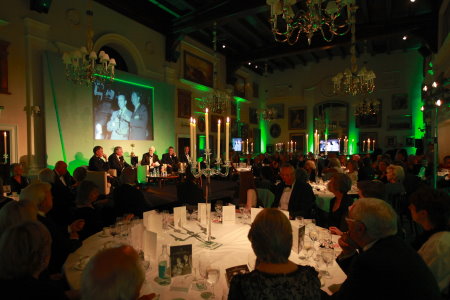 In the elegant surroundings of the Club’s main ballroom, members and honoured guests enjoyed a recreation of the very same menu that was served at the 1953 Ryder Cup Gala Dinner.

All evening a stunning collection of period photographs was shown on big screens around the room, an enigmatic reminder of that dramatic golfing week 60 years ago. Among them were some wonderful action shots of the players in action at Wentworth and even an image of Peter Alliss and his father Percy, himself a Ryder Cup player of great distinction, enjoying tea al fresco between matches. Different times!

The undoubted highlight was a fascinating and entertaining question and answer session hosted in virtuoso fashion by the ‘King of Chat Shows’ (and Wentworth Club member) Sir Michael Parkinson, which gave Peter Alliss, Tony Jacklin, Bernard Gallacher and European Tour Chief Executive George O’Grady, an opportunity to share some of their Ryder Cup stories.

“I’m beginning to feel like the only panda in the zoo,” joked Alliss, in reference to him now being the only surviving member of the GB&I team that took on the mighty United States team that year. “There were 7-8,000 people on the course, roaming all over the place on the fairways and on the greens,” he recalled. “If I’d had half a brain, and Bernard [Hunt] hadn’t three-putted the last, we’d have won that Ryder Cup, but still it was all very exciting and a great experience.”

Tony Jacklin spoke of how the Ryder Cup was somewhat transformed as a competitive golfing spectacle during his transition through the years from player to ultimately to winning captain. “When I played my first Ryder Cup in 1967 we were in awe of the Americans,” he confessed. “They seemed like movie stars to us. Even their clothes fitted properly!”

Jacklin also recalled the famous, and at the time controversial, concession in his 1969 Ryder Cup singles match against Jack Nicklaus. “It was unenviable position really,” admitted Jacklin, “because all your team mates are right there watching and relying on you. That year’s captain Eric Brown came up to me and said [Jacklin now mimicking Brown’s Scottish accent], “You know what you’ve got to do, Tony!”

Jacklin, at that time the reigning Open champion, certainly did. He recalled how walking down the 18th fairway Jack had turned to him and said, ‘Tony, are you nervous?’ Jacklin replied that he was in fact ‘petrified’. ‘Just thought I’d ask,’ replied Jack, ‘because I am, too’. After Nicklaus had two-putted for par, he reached down and picked up Jacklin’s marker. “I don’t think you’d have missed that,” said Nicklaus, “but I didn’t want to give you the opportunity.” It remains one of history’s most noble of sporting gestures.

Bernard Gallacher was making his first appearance at the Club since suffering ‘sudden death syndrome’ in Scotland barely two months ago and received a standing ovation from the assembled guests. “I’m a bit nervous about speaking at a golfing function so soon after the last one,” he said, perhaps only half-jokingly. “I don’t remember anything about it,” added Bernard. “All I remember is waking up in hospital five days later with a priest beside my bed. I’m lucky to be here and I’m very grateful to all the members for their good wishes. I didn’t realize people liked me so much!”

Bernard, of course, inherited the Ryder Cup captaincy from Tony Jacklin. “I learned from Tony and picked up where he left off, basically,” said Bernard, who recounted some fascinating anecdotes, none more poignant than his memories of playing with and captaining Seve Ballesteros. “People talk about his great short game,” he said, “but from the moment I first played with Seve when he was 16 years old I always thought of him as a great, long driver of the ball. Seve had everything and I got the best of him in the 1991 Ryder Cup at Kiawah. He was unbelievable that week.”

Meanwhile, George O’Grady spoke of the great contributions to golf and to the Ryder Cup made by the likes of Alliss, Jacklin and Gallacher. “There’s no question Tony Jacklin helped turn the Ryder Cup around,” said O’Grady, “with all those great players behind him. We’ve just built on that. People respect the traditions of the Ryder Cup; it’s a wonderful commodity that inspires generations of boys and girls to take up golf.”

The evening was brought to an end in rather touching fashion as Sir Michael read out a letter to Peter Alliss from golfing legend Jack Burke Jnr, the only surviving member of the 1953 US team. “If I get there [to heaven] before you,” wrote Burke, “I’ll have the gates left open and you can have that game with Ben Hogan.”

And that was that. In the best traditions of light entertainment, the stars of the night departed the stage with the crowd no doubt wanting more. However, as Sir Michael said, “it’s past all our bed times now and we really should be at home with our bed socks on.”
This was a very special night for Wentworth Club – and a special night to be at Wentworth Club.