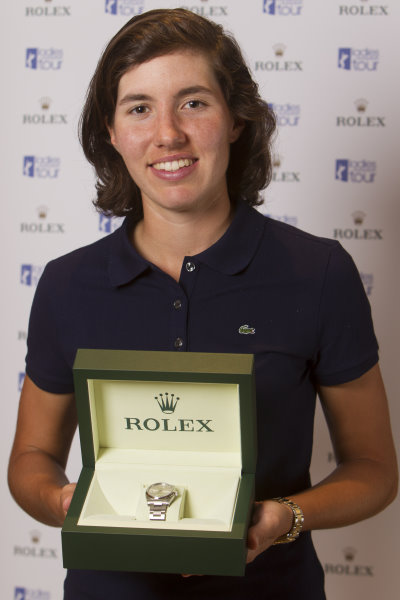 The Ladies European Tour is delighted to announce that Carlota Ciganda has won the 2012 Rolex Rookie of the Year Award.

Ciganda is the first player since Laura Davies in 1985 to win the LET Order of Merit and Rookie of the Year Awards in the same season.

The 22-year-old from Pamplona in Spain was also voted ‘Players’ Player of the Year’ for 2012, following her sensational results which included two victories in Holland and China, along with ten further top ten finishes from 19 tournaments played.

Ciganda said: “It has been a great rookie year for me. I have been playing really good golf, very happy with my game. For me, the best memories, they have been winning the two events. The first one in Holland, it was very special because it was my first one.  And it was also my birthday week and my mom was there, my uncle, so that was nice.  Then winning in China was also great, because I played really good golf, and I had a lot of fun. I really like the course over there. But I mean overall it has been a great year, I really liked it on the Tour.

“I really enjoyed playing in Europe: the players were very good and very nice with me. It’s like a family so it’s really nice. Then I was happy to have my caddie, as well, he’s a good friend. His name is Javi. He helps me a lot and has a lot of confidence in my game. He was really helping me and I think I’ve been very lucky.”

Ciganda led the LET season’s statistics for total birdies with 204. She ranked second in scoring average with an average score of 70.5 and was also ranked second in greens in regulation with 80.36 per cent from 66 tournament rounds.

Alexandra Armas, Executive Director of the Ladies European Tour, said: “We congratulate Carlota on winning the prestigious Rolex Rookie of the Year Award. A tremendous ambassador not only for the Ladies European Tour but also for the game of golf, Carlota possesses all of the attributes required to enjoy a long and distinguished career. On behalf of the staff and members of the LET, I wish her the very best for the future.”