The trophy named in honour of American Vietnam veteran and Purple Heart recipient; Capt Kent Pietsch is played annually between the UK Battle Back Golf Team and the USA Wounded Warrior Project Golf Team in a Ryder Cup style format. This year’s fixture was played at the home of the Players Championship, TPC Sawgrass, Florida.

The trophy was named after Captain Pietsch due to his Purple Heart for bravery in the face of the enemy and for his love of golf being an ex Golf Captain at the Wentworth Club. The Courage Cup is synonymous with the players of today and the battles they have fought physically and psychologically through their rehabilitation.

The tournament is always competitive, yet played in the best spirit and true sportsmanship which forges friendships for life. 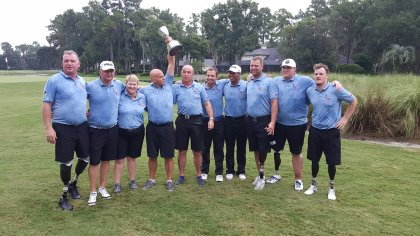 Going into the 2015 event the British team were the current holders having won the previous year at the prestigious Walton Heath Golf Club by 15½ to 4½..

Team selection was made after splitting the players into handicap sections (15 and under, 15 to 21 and over 21) in order to ensure that golfers from all abilities were given the opportunity to represent. Three golfers were selected from each category plus the playing captain. Selections were influenced by the golfers’ commitment, their attendance at the past year’s events and their current form.

With the UK team in buoyant mood, the 3-day tournament started with 4-ball betterball, the Battle Back team made an excellent start, adeptly showing the USA team how the idiosyncrasies of team matchplay golf can differ to strokeplay  taking the first day 4½ – ½.

Round 2 saw the teams compete in Greensomes foursomes, which sees golfers in teams of 2 using 1 ball. Flight Sergeant Keith Davies mixed the teams up and pairings performed to ensure that Battle Back would further consolidate on the lead, posting a 4 – 1 scoreline.

With an 8½ – 1½ lead, the Battle Back team just needed 1½ points to retain the trophy. The final day (singles) saw a few early matches go to the wire giving the Wounded Warrior team a glimmer of hope, but Gaz Meekins held his nerve and sealed the winning putt. The final day was won again by Battle Back 8-2, which set the overall final score at 16½ – 3½. Further testament to the performance was the statistic each UK golfer had won at least 2 points of a possible 3.

A record breaking win for the Battle Back Team however a great bond was formed and both teams celebrated together on the final hole with the kindly donated champagne. A formal evening dinner with speeches brought the event to a close. As normal the event could not have taken place without financial support from our sponsors. Our thanks to the Wounded Warrior Project, Help for Heroes, PING Europe, and Raytheon for their generous donations.