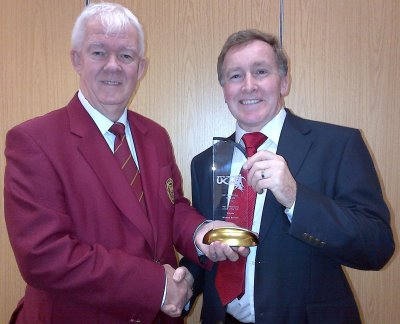 Rory McIlroy’s coach Michael Bannon was one of four coaches to receive a High-Performance Coach of the Year Award at the UK Coaching Awards 2012: Supported by Gillette.

Bannon received his award from sports coach UK Patron HRH the Princess Royal in a glittering ceremony at the Lancaster, London.

The former Bangor Golf Club head professional follows in the footsteps of PGA Master Professional Pete Cowen who has also won the award and John Jacobs who received a lifetime achievement accolade.

The Northern Irishman has coached the USPGA champion since he was seven years old, combining his role of coaching golf to club members and the surrounding local community, with the task of nurturing the up-and-coming McIlroy.

In June this year, McIlroy persuaded Bannon to leave his position atBangorand become his dedicated full time coach. Since then, he has travelled with McIlroy, primarily on the USPGA Tour, and has been credited with bringing McIlroy back to his top form, winning the USPGA Championship by a record eight shots, and becoming the first golfer to win back-to-back tournaments on the USPGA Tour since Tiger Woods in 2009.

Dr Kyle Phillpots, PGA director of education and career development, paid tribute to Bannon, commenting: “It is great to see that another PGA Professional has been recognised for his role in the success of an outstanding golfer.

“Taking Rory from a young boy to major success shows the range of skills that Michael has as a coach. For the player/coach relationship to develop as it has over the years demonstrates the level of trust that Rory has in Michael who has clearly been the Right Coach in theRight Placeat the Right Time.”

Irish Regional secretary Michael McCumiskey, who presented Bannon with his award, said: “It was a great honour to present the award to Michael who is richly deserving of his recognition.

“Michael said he believed he represents all PGA club professionals who teach the game and that this honour reflected the dedication and skill of all his fellow PGA professionals.

“He has been a teacher of the game for 30 years and to all kinds of golfer. And such is his dedication he has even volunteered himself to conduct a seminar for fellow PGA members relating to coaching.”

Peter Eriksson, the new Head Coach at UK Athletics, Women’s Endurance track cycling coach Paul Manning, and Jessica Ennis’ coach Toni Minichiello also received a High-Performance Coach of the Year gongs with the UK Coaching Awards judging panel deciding to make multiple awards in this category to reflect success at the London 2012 Olympic and Paralympic Games, and in other sports.