Andrew Stanger Is Toro Student Greenkeeper of the Year 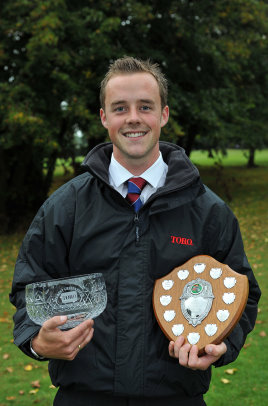 Andrew Stanger, head greenkeeper at Horsforth Golf Club in Leeds, has fulfilled a childhood ambition by winning the title of Toro Student Greenkeeper of the Year 2010.

At the tender age of 12, Andrew told his school’s career advisor that he loved cutting grass and would ideally like to make a living doing just that. Instructed to check out a career in greenkeeping on the internet, the Toro Student Greenkeeper of the Year Award was the first thing he came across, sparking the youngster’s hopes to one day follow in the 1997 winner’s footsteps.

As Andrew recalls: “The awards have been on my radar ever since. That passion for greenkeeping has stayed with me and I’ve always had high hopes for my career – just to be put forward by my college is a huge boost, but to win was a big career goal and one I can’t quite believe I’ve achieved.”

The 25-year-old won the prestigious competition after beating off stiff competition from seven fellow student greenkeepers at the national finals held at BIGGA House near York recently. An Askham Bryan College student who has just completed an NVQ Level 3 in Sports Turf Management, Andrew wowed the judges with his drive and the wealth of experience he has amassed in his relatively short career.

“To be honest, it was a complete shock when I was announced the winner,” says Andrew of the climax of the competition, which is sponsored by turf machinery and irrigation systems manufacturer Toro and its distributor Lely UK, and organised by the British and International Golf Greenkeepers Association (BIGGA). “The runners-up were announced first and there were still so many strong contenders on the bench. I’m thrilled to have won.”

As part of his prize, Andrew has won an amazing, all-expenses-paid trip to the US. After attending a six-week residential turf management course at the University of Massachusetts in early 2011, he’ll also benefit from visits to The Toro Company’s global headquarters in Minneapolis and renowned GCSAA Golf Industry Show & Conference in Orlando in February.

And with Andrew already having spent time in the States developing his career at golf clubs including New Jersey’s Liberty National, and Augusta National in Georgia, he says he can’t wait to return there to make the most of this latest learning experience. “The turf courses out in America are just phenomenal, so I’m looking forward to going back there and learning all I can.”

Andrew’s also excited to visit Toro’s headquarters: “I’m fortunate to have only ever worked with Toro machines, so to get this further insight into the company will be really useful. I really look forward to representing BIGGA as the Toro Student Greenkeeper of the Year over the next 12 months.”

The judging panel, including Lely’s Nigel Lovatt, Bruce Jamieson, representing The Toro Company, and BIGGA’s Chris Sealey and Sami Collins, also selected two runners-up. Sebastian Cavilla, 25, an assistant greenkeeper at the Manor House Hotel & Golf Club in Wiltshire, and a Cannington College student, and Sean Borrett, 29, an assistant greenkeeper at Ellesborough Golf Club in Buckinghamshire, and a Myerscough College student, both win a trip to Harrogate Week in January.

For more information on the annual Toro Student Greenkeeper of the Year Award visit www.bigga.org.uk

The PGA of America and Ryder Cup Europe jointly announced that the matches due to take place in Wisconsin in September will be delayed by a year due to the on-going Covid-19 pandemic.

Scottish Golf has reported that clubs across the country are experiencing a boom in new members as lockdown restrictions continue to ease.

England Golf is inviting applications from today (July 8) from all affiliated clubs and facilities to The R&A's Covid-19 Support Fund.