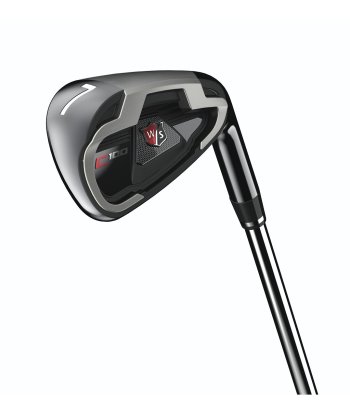 Wilson Staff, the most successful irons manufacturer in the history of the game with 61 Major wins, has launched the fourth generation of its award-winning ‘Control’ range in the form of the C100 irons that have been proven to deliver extra playability and distance.

The C100 irons have been designed to suit golfers looking for a crossover of iron attributes – a player’s club look at address with the added benefit of distance and accuracy-related technologies. An optimised head design with a sleek black PVD finish helps minimise the visual appearance, as well as reducing glare. The irons also incorporate Exoskeleton™ weighting – accounting for a third of the total head mass – that maximises MOI for increased distance, whilst still maintaining a midsize head to appeal to lower handicap players.

Replacing the Ci11 irons that proved so popular over the last two years, the newC100 irons have been constructed from a stronger stainless steel material to allow for Wilson Staff’s thinnest-faced ‘Control’ iron yet, creating faster ball speeds and longer distances.

“Based on our extensive player test results, the C100 is one of the longest-playing irons on the market,” said Michael Vrska, Wilson Golf’s Global Director for R&D. “The Exoskeleton™ technology makes the irons very powerful and easy to hit, and when combined with the midsize head, it provides the perfect blend of control and distance for golfers who want to get down to a single-figure handicap,” he added.

“Due to its sleek appearance and playability, the iron will also appeal to low-handicap golfers – for instance, we’ve already built a set for Padraig Harrington, who has used ‘Control’ irons over the years for extra distance on blustery links courses and won on Tour with various ‘C’ irons in his bag,” added Vrska.

The C100 irons sit in the middle of Wilson Staff’s F-C-D (Feel-Control-Distance) system that encourages golfers to find the irons that perfectly suit their individual playing styles. ‘Feel’ players who value precision and shot-shaping will be most suited to the FG Tour M3 irons launched late last year, while at the other end of the spectrum, ‘Distance’ players who demand extra yardage, forgiveness and confidence at address should be playing with the popular D-100 irons. The C100irons suit golfers looking for a balance of forgiveness, power and shot-making capability.