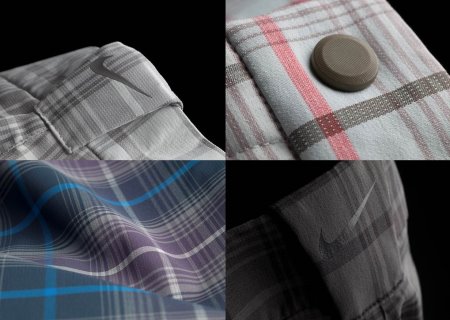 Nike Golf is to pay homage to traditional Scottish dress with a special range of tartan created for its Tour staff athletes which will be worn by World No.2 Rory McIlroy, and 10 others, during today’s first round of this week’s BMW PGA Championship at Wentworth.

Tracing its roots back to Scotland’s highland clans in the 16th century, tartan is intrinsically associated with golf and the people who play it. Registering a new tartan is a complicated procedure, with the process beginning over three years ago, when the seeds of the idea were first sewn.

The designs for the Nike tartan were logged with the Scottish Register of Tartans in February of last year and, after they were approved, the search for a reputable company to produce the designs began. This led Nike Golf’s design team to discover Lochcarron of Scotland, a prestigious Selkirk based company that has been designing and manufacturing its own woven fabrics since 1947. As the world’s leading tartan manufacturer, and with the largest range of authentic Scottish tartans, it was only natural that Nike chose Lochcarron to produce its own special range of the iconic highland wear.

“It has been an exciting process for our design team to work alongside the designers at Nike Golf to produce a tartan that not only has its own personality and heritage, but one that meets the performance demands of modern golfers,” said Lochcarron of Scotland

Fast forward to May 2013, and Nike Golf’s team of athletes is preparing to hit the fairways on Wentworth’s West Course in a bespoke collection of four tartan trousers in Nike Golf’s Clan colours, black and grey. Featuring Nike’s Dri-FIT technology and designed with insight from Tour staff athletes such as Tiger Woods and Paul Casey, these game changing trousers seamlessly combine tradition and innovation.

Each athlete, with the exception of McIlroy (Bodymap polo), will wear tartan in combination with the Victory polo, from Nike Golf’s 2013 spring/summer apparel range, which is an improved version of what was already the number one selling polo shirt worldwide for the global brand.

“We have always had plaid shorts and trousers in our line, and owning our own Tartan gave meaning to a silhouette that has become such a staple in the golf athlete’s wardrobe,” says Jason Wade, apparel product director, EMEA. “The Nike Golf Tartan was produced to respect, reflect, and connect Nike products to the heritage and culture of the game. We strived to create tartan that best reflected the brand, and that is where the black and the grey colours came about, with the signature red built in.”

Wade added: “With The Open Championship being held at Muirfield this summer, and the Ryder Cup being hosted at Gleneagles in 2014, it seemed like the most appropriate time for Nike Golf to come up with its own fashionable slant on the one of Scotland’s most iconic exports.”

As well as being true to tartan’s roots, the new Nike Golf SP13 tartan collection of features Nike’s renowned technological innovations such as a yarn dyed woven Dri-FIT that offers a premium construction over a printed pattern.

It was a challenging brief, but one that the professional team at Lochcarron, whose product range spans from kilts to cashmere blankets, ties and home furnishings, rose to magnificently.

Besides playing a starring role in Nike Golf’s Spring Performance collection where there are also seven shorts available, the new tartan colour scheme will also feature in several other items in the Autumn 13 collection, including detailing on pockets, back neck facings, inside collars, and as a tonal embossed application in many products throughout the range. In addition to apparel, the Nike Golf Tartan will also be used on golf bags, and even in the sockliner in one of the Lunar Swingtip shoes.