Titleist has brought an end to the 11-year reign of its AP Series of irons with the launch of a new family of irons called T-Series.

The final set of AP irons, the 718s, were unveiled two years ago, and their replacements follow a similar structure in that there are three models to suit a wide range of golfers, although Titleist felt that the enhancements in their design meant that they could no longer be called AP irons.

Josh Talge, vice president of Titleist golf club marketing, said: “The T-Series represents a revolutionary step forward in Titleist iron design and technology. Our club R&D team is nearly six times the size it was when the first AP iron was introduced 11 years ago. It’s because of that ongoing investment that we’ve been able to make such significant breakthroughs in materials and construction, and learn how to package those technologies into constructions that offer the look, sound and feel that players expect from a Titleist iron.”

Titleist T100 irons
The T100 is a players’ iron that features a forged cavity construction and a thinner, more responsive face. An average of 66g of co-forged, dual density tungsten optimizes launch within the 3-7-irons and boosts off-centre forgiveness. The irons also boast enhanced sole camber for cleaner turf interaction, less offset and a thinner topline that matches the old 718 CB model.

Titleist T200 irons
The T200 features ‘Max Impact’, an innovation that extends the maximum speed across the face for consistent distance by combining Titleist’s thinnest face, a structural support and a silicone polymer core developed in partnership with the Titleist ball team. Performance benefits include an improved launch and a more preferable feel. This players’ distance iron has a forged L-face, tungsten weighting in the long irons and is designed for golfers seeking distance from a tour-inspired look.

Titleist T300 irons
The largest and longest of the T-Series, the T300 features Max Impact technology and tungsten weighting for distance and forgiveness. It also has a medallion dampener for improved sound and feel, and added bounce on the sole for improved turf interaction. 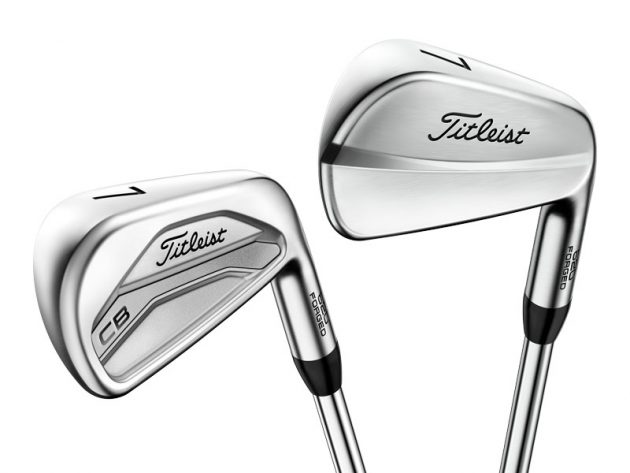 Titleist 620 irons
For the better player seeking a softer feel, there is the option of the new 620 CB and MB irons. The 620 CB now has a thinner topline and tungsten weighting in the 3 and 4-iron only, while the 620 MB is a one-piece forged muscleback for the ultimate in feel and shot making and boasts a new brushed finish.