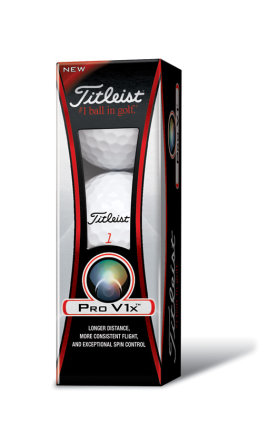 Ten years after the introduction of the original Pro V1,Titleist announces the launch of the most technically advanced Pro V1 and Pro V1x golf balls yet.

Product improvements to its flagship models have been engineered to satisfy the demands of the world’s best professional tour players, club professionals, competitive amateurs and aspiring golfers.

“Golf is a game of continuous improvement and serious golfers want to get better,” said Mary Lou Bohn, Vice President, Titleist Golf Ball Marketing and Communications. “At Titleist, we care about golfers’ games and will only introduce a new golf ball if it truly performs better and helps them shoot lower scores. We have tested and validated the performance of the new Pro V1 and Pro V1x with players throughout the pyramid of influence with resoundingly positive performance feedback and success. New Pro V1 and Pro V1x are the best performing golf balls we’ve ever made, and the best performing golf balls in the game.”

More than 100 tour players have made the switch to the new Pro V1 and Pro V1x since prototypes were first seeded in October. Most notably Padraig Harrington became the first winner with the new Pro V1x when he captured the Iskandor Johor Open in Malaysia – the first time he teed up the golf ball in competition.

The New Titleist Pro V1 and Pro V1x golf balls begin shipping to golf shops in February. Both models will be sold in traditional dozen and three-ball sleeves with RRP £50 per dozen.