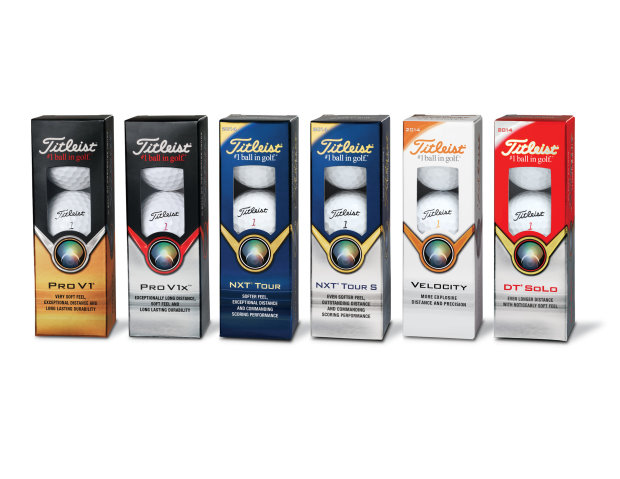 Every Titleist golf ball, including the iconic Pro V1 and Pro V1x, is precision engineered by Titleist Golf Ball R&D associates and manufactured in the company’s world-class owned and operated facilities to provide a meaningful performance and preference option. The new 2014 models offer the same renowned quality and consistency that have become synonymous with any golf ball bearing the “Titleist” script.

New NXT Tour and softer-feeling NXT Tour S provide exceptional distance and commanding short game scoring performance, exceeded only by Pro V1 and Pro V1x. Both new models have been improved with a reengineered softer compression core and cover so golfers will experience even softer feel. 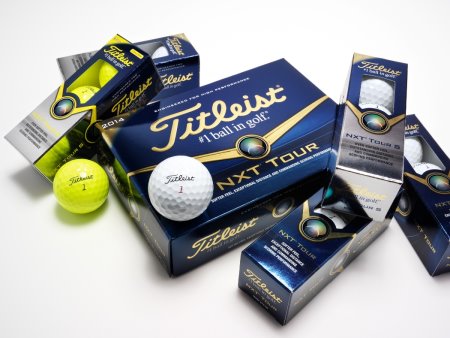 Titleist R&D designed the 2014 Velocity with a reformulated, proprietary LSX core that produces a high initial ball speed for powerful distance. A new, spherically tiled 328 tetrahedral dimple design delivers a more penetrating trajectory with a shallower angle of descent for even more roll. The result is even more explosive distance on all full swing shots.

New DT SoLo has been redesigned to provide the best combination of soft feel and distance in a DT yet. With its super soft compression core and soft ionomer cover, the 2014 model features a new spherically tiled 376 tetrahedral dimple pattern that contributes to even longer driver and iron distance while retaining the distinctly soft feel and consistency that DT players have come to love and trust.

“When we make an improvement to a Titleist golf ball, it’s in direct response to what golfers tell us they need and want,” said Bill Morgan, Senior Vice President of Titleist Golf Ball R&D. “We’re constantly in the field talking with golfers, capturing their launch conditions on all types of shots, and observing how different golf balls perform for their game. All of this information feeds the product development process and allows us to focus our design efforts and ultimately our prototype testing in ways that will enhance performance for these golfers.”

More than 40,000 golfers from around the world participated in the white-box testing and validation process, with golfers receiving prototype NXT Tour, NXT Tour S, Velocity or DT SoLo golf balls for on-course evaluation. Player feedback was then gathered through Team Titleist and shared with Titleist R&D.

All new models are now available in golf shops worldwide.

What are the features and benefits, and what’s new about the 2014 golf ball line-up?

For 2014 the NXT Tour family is designed for golfers who are looking for great performance and great scoring performance, but for whatever reason don’t want to spend the money for Pro V1 or Pro V1x, or who prioritise preference options such as an optic colour, or very, very soft feel which is delivered in NXT Tour S.

NXT Tour and NXT Tour S offer golfers excellent scoring performance, which is only exceeded by Pro V1 and Pro V1x, exceptional distance and soft feel. The reason that we have two golf balls in the NXT Tour family is that NXT Tour S offers the NXT tour performance, with softer feel. For 2014, when we talked to golfers about what they were looking for, they told us that they loved the performance but that they would prefer a little softer feel in both models. Golfers were saying, ‘Give me a softer version!’, so we went and we engineered a reformulated NXT Tour and NXT Tour S with a softer core and a softer cover. The reason we did that was not only to deliver a softer feel, but also to ensure that we didn’t give anything up in terms of performance. You bring ‘softer’ into the equation and often you run the risk of lowering ball speed or lowering spin, and valuable spin in the short game, so we softened the cover to maintain that scoring performance and we brought the compression down a little bit to lower spin in the longer shots and maintain our distance. So NXT Tour and NXT Tour S get better for 2014 in that they deliver softer feel and still have that great scoring performance and exceptional distance.

And what about 2014 Velocity and DT SoLo, which we also see in the range?

Velocity is exactly what it sounds like; it’s a golf ball that is designed for golfers who really prioritise distance over everything else. Velocity is an explosively long golf ball and provides low spin on all long shots so that you can generate lots and lots of distance. Not surprisingly, golfers who choose Velocity want more distance! What we did for 2014 is that we re-engineered the golf ball from core to cover. We reformulated the core using LSX core technology that helped us lower the spin a little bit on longer shots helping to maximise distance. We also brought a 328-spherically tiled tetrahedral dimple pattern to the Velocity which provides more consistent flight, resulting in more distance. And last but not least, the result of that reformulation also brought the compression down a little bit, resulting in slightly softer feel on full swing shots with Velocity. Really, the 2014 Velocity is now longer on all shots, more consistent on all shots because of the new aerodynamics and provides a little softer feel because of the reformulated core.

On DT SoLo, the golfers that chose this have told us time and time again that they really love the soft feel and that is their priority. DT SoLo is the softest compression Titleist golf ball and for 2014 we didn’t want to mess with its most important feature, which is the soft feel, but we wanted to try to increase distance; we felt like we had the opportunity to offer a little more distance for the DT golfer. The easiest thing to do would have been to bring the compression up a little bit; compression goes up, ball speed tends to go up and would help us generate more distance. That would put the soft compression feel of DT SoLo at risk, so instead we went back and looked at aerodynamics. We put on a new aerodynamic pattern, a 376 tetrahedral dimple pattern with spherical tiling, to deliver more distance for DT SoLo without sacrificing any of the great feel; the compression stays the same and the great soft feel that golfers love in DT SoLo will remain a part of that product for 2014.

So, we have refreshed the entire line and are in a great position to offer golfers not only great performance option, but also great preference options as well.

How important was feedback from real golfers in designing the 2014 golf ball line-up?

When we set a performance target the first thing we do is go and measure it in the lab. We do it first on the indoor test range, then we have a robot hit it out on the range and we need to see the performance benefits that we’re looking for, first and foremost, when we measure it by data. But that’s not enough for us, we want to go out and validate that performance with golfers as well, so over the course of the last 6 months we’ve tested all of the 2014 golf balls with almost 40,000 golfers and members of Team Titleist. The golfers were people who not only play with Titleist golf balls, but about 25% of the players we tested with played a competitive product. Across the board, we had golfers who came back and saw the performance improvements that we were looking for. Golfers who played NXT Tour and NXT Tour S told us that they preferred the feel of the new models, really validating that we had achieved what we were trying to. Same thing with Velocity; they really preferred the distance on the new Velocity relative to the prior generation or the golf ball they were using most often, if it was a competitive product. So we do extensive testing with golfers when it comes to validating product before we bring them to market to ensure that we have something that isn’t just going to be measured on a machine, but that golfers are actually going to see on the golf course.