The Power of Recommendation 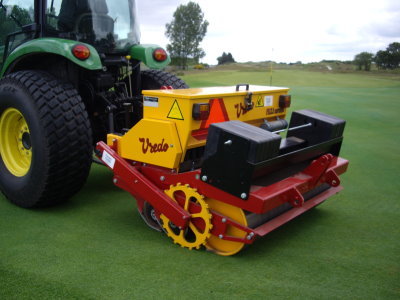 “I was immediately impressed with the quietness and speed of operation,” says Mike. “Royal Birkdale had used a Vredo 1.20mtr mounted Super Compact for overseeding some weeks before and it was already evident from the excellent germination that the seed uptake was very high.”

The unique action of the Vredo overseeding system delivers an exceptionally high seed germination rate (90-95%).  The Super Compact version has a double line of closely spaced discs only 3.5cm apart, which make a precise cut into the turf where the seed is sown directly in contact with the soil.

Mike says: “The way the structure of the turf is undisturbed means the surface can be brought back into play immediately.  I was so impressed that I requested an immediate quote and put it forward to my committee for funding.”

In fact it wasn’t just the Royal Birkdale demonstration that provided the recommendation. The Chairman of Finance for Southport and Ainsdale Golf Club happened to be competing in a friendly game at Royal Liverpool Golf Club – who purchased a Vredo Super Compact Seeder two years ago – the previous week and had the Vredo recommended to him by a couple of the other players. They were so convincing that he had effectively approved the order before Mike had even submitted it.