As a golfer moves through the bag, the angle of the club face changes – but often the golfer’s spine angle remains the same, affecting the ball flight. This is just one of the anomalies addressed by the TALON MK2 – a unique training aid delivering real-time feedback on the set-up and recommended by one of the UK’s top golf coaches. 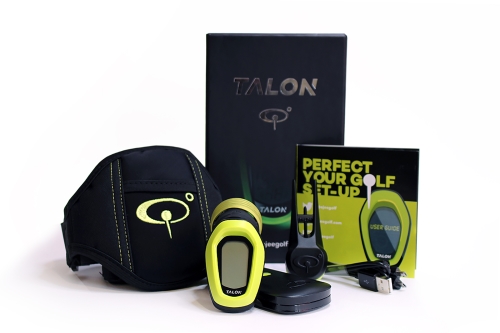 Kevin Craggs, voted a UK top-25 coach by Golf Monthly magazine, built his reputation on successfully improving golfers at all levels, from amateurs to European Tour winners, and, in 2016, became an ambassador for Ojee Golf’s TALON after using it successfully with his students.

Company founder Matt Hulbert explained: “When we launched the original TALON, it delivered what it promised – assistance in finding the ideal spine angle and reducing the handicap. But as in most new products, it became obvious that some fine tuning would help it perform even better and make it more user-friendly.

“I’m a great believer in the adage attributed to Steve Jobs, the co-founder of Apple: ‘real artists ship’. We had conceived a product which could genuinely make a difference to golfers and it was important to get it in their hands so they could take advantage. However, it was, arguably, a little over-engineered and didn’t focus on the data that was the most important.

“Now, we believe the TALON MK2’s major benefit is in finding a golfer’s perfect spine angle for each club. Evidence suggests there is a direct relation between the changes in spine angle required for each club. So if you know your perfect angle with your favourite club, TALON MK2 can help determine the perfect angle for every other club in your bag.”

Ojee Golf’s latest research has found that, as the club-shaft angle changes with each club, a golfer’s spine angle should adjust accordingly so that the difference between the club shaft and spine angle – known as the ‘Ojee Angle’ – remains constant throughout the bag.

Tests on the driving range using the TALON with many independent golfers backed up the evidence, with both the consistency of the swing and ball flight found to have improved. And Christopher Joyce PhD AEP, a sports’ scientist based in Australia, is aiming to prove and confirm the ‘Ojee Angle’ theory further over the next four months by testing the findings under strict laboratory conditions at the University of Notre Dame in Freemantle, Western Australia.

The TALON MK2 comes with enhanced functionality and responsivity, and increased user-friendliness. What’s more, it costs less than the original TALON.

The innovative TALON MK2 training aid delivers real-time, visual feedback through a digital display unit that attaches securely to the top of any golf club. Together with a separate, sturdy wireless back unit, the TALON MK2 utilises patented technology to remove guesswork by calculating and displaying clearly angles of address.