Nikon Opens On Up 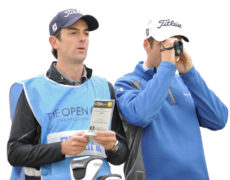 They say that golf is a game where gradual progress is the order of improvement and Nikon Laser Rangefinders is one player in the industry doing just that.

From the fairways of The Open Championship and the drives of Ross Fisher to the tee boxes of every public golf course and every amateur in the UK Nikon is becoming more and more established as a high quality golf brand.

Recent months have seen a number of tour caddies, who are relied upon week in week out by the best golfers in the world, switch to using Nikon to help measure yardages accurately for their players.

The movement coincides with the official supplier of yardage books to The European Tour, Dion Stevens, doing just the same thing. Stevens, who has measured in excess of 700 golf courses in his career, labels the Nikon 1000AS as “the best rangefinder he has ever used” and has evidently given the brand his implicit trust to help him perform one of the highest pressured jobs on tour.

However, it isn’t just the upper echelons of the European Tour where Nikon’s presence is being felt. For as time goes on Nikon is selling more and more to the UK amateurs.

Sales are already heavily up on last year as Nikon is being stocked in more and more local pro shops and already has a strong foothold in all of the major golf retailers.

Nikon have also just completed a successful promotional campaign at The Open Championship where their presence as a honourable patron was clearly recognised.

Throughout the week all modes of public transport were sponsored by Nikon, including the continuous bus service and the extra fast train running from St Pancreas to Sandwich.

The brand’s presence didn’t stop there, for within The Open Championship site itself Nikon gave spectators the chance to have their swings expertly analysed by PGA professionals through cutting edge, high-speed camera technology all in exchange for small donations to charity.

The golfing public then had their swings put on a memory stick for them to takeaway and view in turn ensuring that Nikon can positively assist them in their steady journey up the golfing ladder.