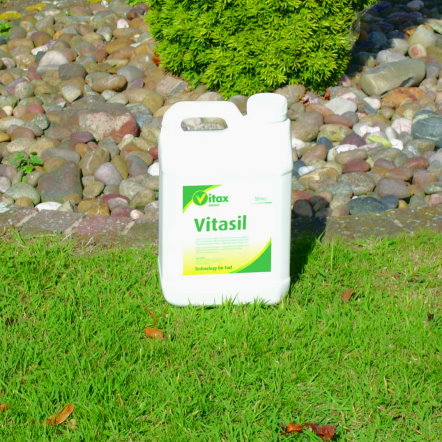 SwardPhite is based on potassium phosphite (PO₃) and has smaller more reactive molecules than conventional phosphate (PO₄).  Its mobility enables it to travel easily from roots to leaves and vice versa, making it rapidly available where it is most needed. Its effect is to promote healthy turf growth by improving natural defence systems and by stimulating meristem cell activity in roots and crowns.

Foliar applied, SwardPhite will also help to avoid phosphate lock-up during Summer stress periods and, under difficult conditions, will aid the uptake of potassium, calcium magnesium, iron and manganese.

The second new product is VitaSil, a liquid silicon stress reducer for turf.  Silicon is now recognised as a vital component in turf nutrient programmes because it helps strengthen cell walls, toughens epidermal cells and boosts natural defences against disease.

Turf strengthened with VitaSil is more resistant to heat and drought stress , wear and disease attack.  The stronger cell walls also help maintain water flow in the plant under all stress conditions.

The other advantage offered by VitaSil is an improved playing surface.  Turf blades stand more erect when fortified with VitaSil so seed heads and stalky material are more reliably mown off, giving a cleaner cut, reduced accumulation of thatch, better appearance and faster ball roll.

Both products were introduced at the recent Scotsturf exhibition and are featured in the new 2012 Vitax Amenity catalogue.

For more information or a copy of the catalogue call 01530 510060 or visit the website at www.vitaxamenity.co.uk.

Although the membership revenue figures with this client are impressive, this only scratches the surface due to what both Intuitive Edge Marketing and management have learned in this short space of time