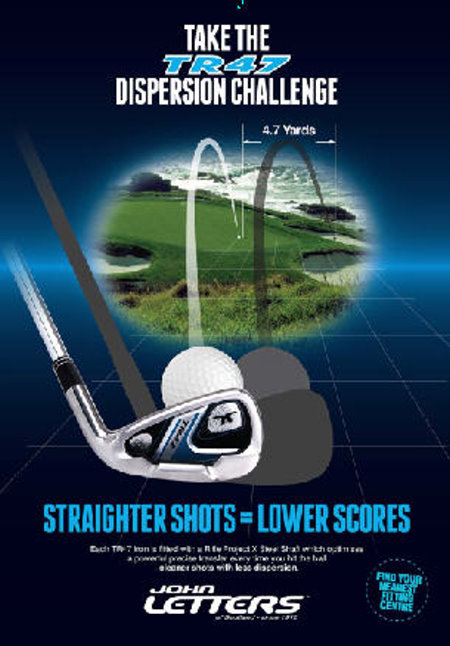 Following the runaway success of its TR47 distance challenge, John Letters, is introducing a new challenge focusing on Accuracy – in a bid to prove their TR47 irons are not only the longest but also the straightest on the market.

The TR47 irons, which launched in 2013, have proved immensely popular with customers. The first TR47 challenge promised that the pioneering clubs would make every golfer ‘47 yards longer’ across their bag – or they would get their money back.

More than 500 golfers took the challenge in 2013 at their nearest Direct Golf store and not a single customer took up the offer of a refund.

Staff will measure the ‘dispersement’ on the two sets of shots – in short, how far from a designated target the shots were – and demonstrate just how much straighter the TR47 irons are than their current clubs.

As with the previous challenge, any golfers purchasing the irons who don’t see a huge improvement in their accuracy will be able to return the clubs and get their money back.

Direct Golf’s Chris Clarke said: “The TR47 iron is the best-selling iron in the 96-year history of John Letters and was also acclaimed as the best-performing iron in many magazine reviews.

“As a result, the original TR47 challenge was a huge success, and proved the TR47 irons are definitely the longest irons on the market. And thanks to the TR47 Challenge 2.0, we’re confident that they’ll soon be officially the straightest, too.

“The combination of the TR47’s Tour Proven Rifle project X shaft and its low torque UST grip means every swing with a TR47 iron will result in a solid impact and unrivalled accuracy.

“We have huge confidence the product can live up to this claim, and we’re certain this challenge will be every bit as success as the original TR47 challenge.”

The 2.2mm thin face on the TR47 irons combine with a classic look, Project X high-end steel shaft and the UST Mamiya low torque grip, to give the irons unparalleled distance and feel. The set also gives the customer the option of the increasingly popular hybrids in the longer clubs which aids performance for most golfers.

What’s more, the TR47 set – comprising nine clubs, with a three and four hybrid and five-iron to sand wedge – sits cheaper than many brands at just £399.

The range of woods has also proved popular, with sales of the driver and fairway woods exceeding expectations last year – especially the 13 and 15 degree options, which make it much easier for many golfers to use a driver. The driver’s 15-3-3-3 titanium face combines with a lightweight UST V2 Shaft to afford maximum distance and forgiveness – and all for just £149.

* For full terms and conditions of the money-back offer, visit http://www.direct-golf.co.uk/static/terms/

Glenmuir and Sunderland of Scotland, the Scottish golf clothing brands, have launched a “Your Pro Shop Needs You” campaign to encourage consumers to #ShopSmall by supporting their local golf pro shops.

Bryson Dechambeau captured his first major title using a full bag of Cobra equipment and wearing Puma apparel and shoes at the 120th US Open at Winged Foot.

Golf Genius Software has become an authorised WHS licensee for managing and implementing the upcoming switch to the World Handicap System to all four home nations’ governing bodies for golf.