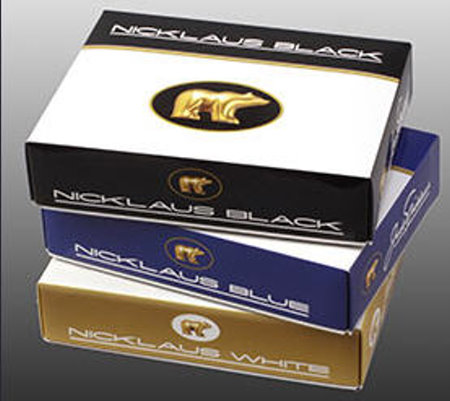 The first-ever Jack Nicklaus Golf Balls are now shipping to customers. The line of golf balls, announced at last month’s Presidents Cup, places an emphasis on simplifying the game, as well as giving back to the game and to charity.

The balls can be ordered exclusively online at www.nicklaus.com and soon through golf/pro shops at the more than 200 Nicklaus Design courses nationwide. A percentage from every golf ball sold in those shops will be donated directly back to the Nicklaus Children’s Health Care Foundation to support paediatric programs and hospitals nationwide, while visitors to nicklaus.com will have the ability to support the Foundation with voluntary contributions. In the first month of advanced orders, more than 80 percent of consumers have made a donation.

“One of our priorities in designing and introducing these golf balls was to ‘give back’-to the game itself and, most important, to charity,” Jack Nicklaus said. “The response from visitors to nicklaus.com has been overwhelming. I want to thank those people who have not only purchased a terrific golf ball, but at the same are supporting wonderful charities that help children in need as well as the families that dearly love them.  I hope people also realize that through the introduction of these golf balls, we are trying to find ways to stir growth in the game by simplifying it while providing consumers the highest quality balls at a price that encourages charitable support”.

“If I had to guess, I would say maybe 7 percent of golfers know their swing speeds, but I can safely say that 100 percent know what tees they play,” Nicklaus said. “My business partner Howard Milstein came up with a concept of matching the golf ball to the tees most golfers play, and through that, players are able to match up a ball with their basic swing speed and ability.” Milstein said, “The beauty of these balls is they solve the golfers’ dilemma of which ball to play-all you need to know is the tee you play from.  Whatever your skill level, our balls are designed to maximize feel and distance from your tee.”

The introduction of a Nicklaus-designed and branded golf ball is the latest venture since Nicklaus partnered with Howard Milstein in 2007 to help further the growth of the company and to realize the full potential of Nicklaus’ brands and reach. Howard Milstein is Chairman and CEO of New York Private Bank & Trust, and is actively involved in the Nicklaus Companies as Co-Chairman along with Jack.

Over the decades spent fashioning his record-setting career-one that includes a record 18 professional major championships, 120 professional victories worldwide, including 73 on the PGA Tour-Jack has exhibited a passion for introducing and growing the game worldwide. Jack has been a Trustee and national co-chair for The First Tee, and this year he launched an initiative with SNAG (Starting New At Golf) called the Jack Nicklaus Learning Leagues, which gives children ages 5 through 12 the opportunity to be introduced to the game at parks and recreation facilities nationwide. Jack was also a “Global Ambassador” for the game’s unified campaign to have golf returned to the Olympic Games. In July, Jack received the Ambassador of Golf Award, presented annually to a person who fosters the ideals of the game on an international level and whose concern for others extends beyond the golf course.

To find out more about the new Nicklaus Golf Ball, including product specs, features and benefits, or to place your advanced order today, visit nicklaus.com