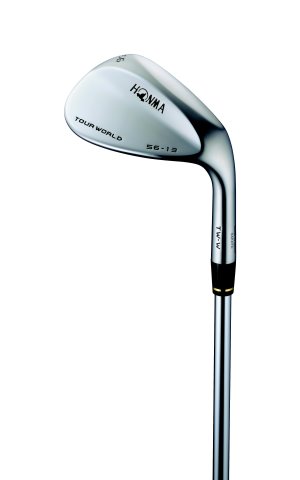 Japanese club-maker Honma has brought two new 2014 items to the UK to boost its best-selling Tour World range of golf equipment – and one is a UK exclusive.

British golfers are getting a bonus with the announcement that Honma’s latest wedge, the 2014 Tour World Wedge (TW-W), will sell in the UK from April.

TW-W, which is only being offered for sale in the Far East and the UK, has a classic teardrop shape with a long hosel, and a special grind flat sole on the higher lofts (56 and 58 degrees) for precise control on the shortest grass.

Developed on Tour by Team Honma’s staff players, the Tour World Wedge offers a crisp contact and smooth flow through the shot on any type of lie, and promotes aggressive shot-making with maximum Tour levels of spin on both full approach shots and shorter chips and pitches.

“Tour World has quickly become Honma’s most popular range in the UK,” said Honma UK spokesman Andy Hiseman. “But although we were offering the excellent Honma Beres W-105C Wedge to complement the irons, our customers were keen to play a wedge which was cut from the same cloth as the rest of the Tour World line, particularly lower-handicap golfers. So we are delighted to be able to bring this beautiful, high-performance Honma wedge to this country, as an exclusive treat for British golfers”.

Also launched this month is Honma’s hand-built 2014 Tour World TW-U, a powerful new driving iron with a rounded heel for a clean-cutting and consistent strike on long approach shots.

A club for the more aggressive, confident golfer, the muscular-looking TW-U clubhead  was developed by Team Honma’s tour staff, and is cast in MS225 steel with tungsten weights on the back face combined with a wide sole to give a deep, low centre of gravity.

“The TW-U is an old-school driving iron which suits the stronger golfer who likes to propel the ball on a penetrating flight path to a distant green” said Hiseman. “If you come up against an opponent who is wielding one of these, you know you are in for a tough game.”

Like all Honma golf equipment, both clubs are hand-built to order in a single location – Honma’s Sakata studio, in northern Japan, where over 100 craftsmen work on every single club the company produces. Each clubhead is precisely finished, measured and balanced by hand.

The TW-W and TW-U at last enable Honma’s many loyal customers in the UK to complete their set of Tour World clubs – and the new Tour World golf balls are just around the corner.

RRPs for Honma’s new clubs are:

Honma in the UK: www.honma.co.uk