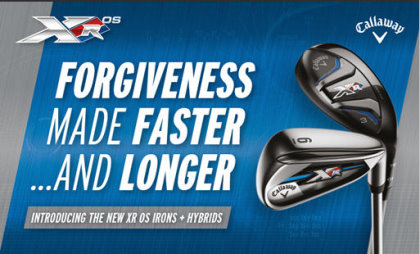 Following last week’s launch of the XR 16 Driver and Fairway Wood, Callaway Golf has now revealed an extension to the popular XR family, with the introduction of new XR OS Irons and Hybrids.

Dr. Alan Hocknell, Head of Research and Development at Callaway Golf, said: “Game improvers represent the widest demographic of golfers but we know one size does not fit all. With XR OS, we wanted to use the ball speed advantages of our second generation iron Cup Face in a way that helps them gain carry distance through the air.”

Featuring a multi-piece construction, the XR OS Irons are manufactured using a precise and meticulous dual heat treatment to optimise ball speed without compromising feel.  A harder heat treatment on the face increases ball speed, while a soft heat treatment is used across the body to enhance feel.

Callaway has also developed a Women’s range of XR OS Irons, featuring lighter head weights with higher lofts and flatter lie angles, which have been designed to suit female golfers.

As an alternative for golfers looking for even greater forgiveness at the top end of the bag, Callaway has also launched the new XR OS Hybrids, which feature the company’s enhanced Forged Hyper Speed Face Cup, delivering the hottest ball speeds, even on off-centre strikes.

With a CG 46% lower than in the X2 Hot Hybrids, the new models feature a completely re-designed head shape, while a re-engineered Internal Standing Wave refines how Callaway increases MOI, offering even greater forgiveness and higher ball flights.

With higher lofts, more offset and a super-deep CG, compared with the standard model, the XR OS Hybrids are even more forgiving, making it supremely easy for mid to high handicap golfers to launch the ball from all conditions.

The XR OS Irons and Hybrids will be available at retail on 22nd January 2016.

The Jack Nicklaus designed 18-hole championship golf course at the spectacular Ury Estate at Stonehaven near Aberdeen is due to open in early Summer 2024.