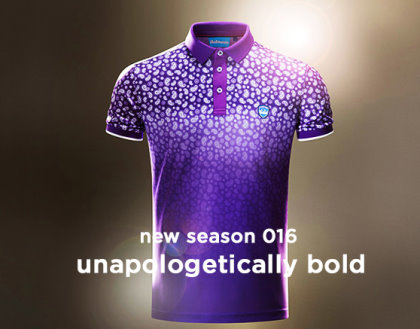 Bunker Mentality one of Europe’s most fashionable golf clothing brands has headlined their new SS2016 season collection with two very exciting new styles which they believe, yet again, shows their leadership of golf fashion.

These two styles are quite different, the first being a Paisley Pattern made famous by the town of Paisley in Scotland. Whilst the arabesque pattern was not invented in Paisley, the town is universally known for giving rise to its popularity in the 18th and 19th centuries, as it was the centre of shawl production featuring the pattern. The pattern was made famous again in the 60’s and the 80’s as part of British Mod youth culture, which gave Bunker the idea of introducing it to the great game of golf as a perfect pattern for Modern British Golf.

The second style also has strong links back to Mod culture with its vertical stripes on the front of the garment. Mod culture was a super-cool British sub-culture, characterized by smooth, sophisticated looks and styles in its menswear. Polo shirts were a big part of this, with small neat collars and various patterns including the vertical stripe. This shirt has a slimmer silhouette and smaller collar to bring this classic look right up to date to fit with our Modern British Golf.

Creative Director, Robert Hart said, “These are two very different technical shirts compared to anything that currently is on the fairways and again, I think they show that we are focused on leading golf fashion in terms of style”. These garments are part of the Bunker Cmax Technical Range and emphasise the brands belief in design. Hart said, “When all brands are using more or less the same fabric with similar properties, design become the key differentiator.”

Bunker Mentality is a brand for golf addicts, people with a love of the great game and who have a different mentality. The brand is distributed throughout Europe and the rest of the world in 12 countries. The company’s mission is to create modern British golf clothing that can be worn ‘from first tee to last orders’ with its designers drawing inspiration from popular culture and fashion.  The brand is pushing the envelope of golf clothing without compromising golf etiquette.